Rail Operations UK has ordered 10 locomotives, with options for 20. 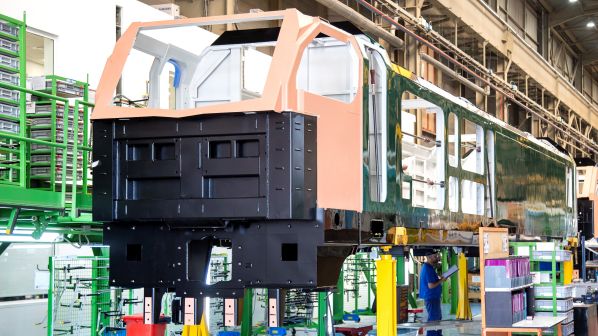 Assembly of sub-systems including piping, cabling, traction systems and other equipment is due to begin soon
Photo Credit: Stadler

STADLER has completed construction of the first bodyshell for a fleet of class 93 locomotives ordered by Rail Operations UK (ROUK), with assembly of sub-systems including piping, cabling, traction systems and other equipment to begin soon. After a period of testing and approvals, the first locomotive is scheduled to be delivered to Britain in March 2023, with entry into service set to take place a few months later.

ROUK and Stadler signed a framework agreement for 30 class 93 tri-mode locomotives in 2021, with an initial order for 10 locomotives. The Bo-Bo class 93 locomotive for freight and passenger duties is based on the class 68 and the Stadler class 88, which have successfully been operating in Britain for several years. All locomotives on order for ROUK are being built at the Stadler plant in Valencia, Spain.

The locomotives will significantly reduce exhaust emissions in both freight and passenger service, supporting net zero targets in Britain. They also include features to minimise energy consumption, and are equipped with a high-efficiency transformer and an ac traction system with IGBT technology. There is one traction inverter per axle to enable better adhesion control, reduce energy consumption and increase reliability. Regenerative braking is also installed.

The class 93 is capable of reaching 177km/h, compared with the class 68 and class 88’s top speed of 160km/h. It also features a hybrid coupler with a draw hook and automatic coupling.

“The class 93 is not only the first tri-mode locomotive to run in Britain, but it’s Stadler’s first tri-mode locomotive, illustrating our commitment to green technology and genuine desire to help governments and businesses around the world decarbonise their cities, towns and villages,” says Stadler Valencia CEO, Mr Iñigo Parra. “We are delighted to see these locomotives take shape and look forward to continued working with our customer and partner, ROUK.”

“We’ve been working with Stadler for four years now to specify and design a locomotive for the future,” says Mr Karl Watts, group president responsible for large scale projects and ITTs at ROUK. “The end product, the class 93 tri-mode, is a locomotive of great operating versatility, incredible energy efficiency and packed full of technology which not only allows us to transform UK train operations but lead the way in UK rail decarbonisation. The locomotive also enables ROUK to penetrate new markets, in particular express freight, previously unavailable using its existing locomotive fleet.”

The September issue of IRJ, our InnoTrans special, will include a detailed report on the class 93.