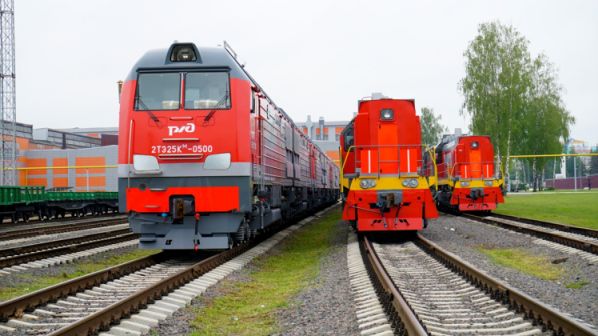 The locomotives have been delivered to the Kuibyshev and Gorky railways since the beginning of the year and TMH has supplied the locomotives under a life-time contract, including maintenance.

TMH says the 5.3MW 2TE25KM two-section unit uses two 2.65MW engines, has a maximum speed of 100km/h, and can haul up to 6400 tonnes. TMH says this capability increase transport capacity while lowering costs.

RZD already uses the 2TE25KM on its network, as does private operator BaltTransService. 2TE25KM locomotives are also used on the Ulan-Bator railway in Mongolia, the Tugnuisky coal mine in Buryatia, the Shubarkol mine and the Sokolovsko-Sarbaisky mining and processing enterprise in Kazakhstan, and at the Navoi mining and metallurgical plant in Uzbekistan.

This month, BMZ began production of three-section 3TE25K2M high-capacity diesel freight locomotives for RZD, and is due to deliver 40 for use from the Komsomolsk-on-Amur depot on the Far Eastern Railway by the end of the year.