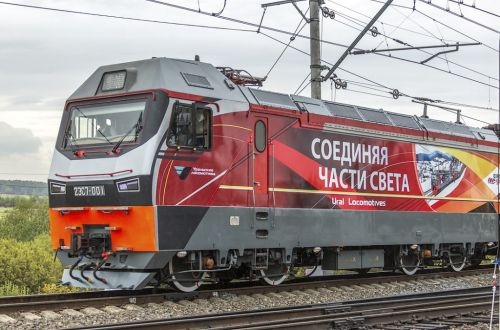 The aim of the tests is to validate the performance of the 8.8MW double-unit locomotive on severe gradients in winter conditions. Trials will take place on the Inzer - Kartaly - Magnitogorsk section of the railway, which is characterised by multiple prolonged ascents and descents, with maximum gradients of 17-18‰.

The 25kV 50Hz ac asynchronous-traction locomotive was built at Ural Locomotives' plant in Yekaterinburg in 2013 and has a starting tractive effort of 783kN and a maximum speed of 120km/h. Ural Locomotives says the 2ES7 can haul a 9000-tonne train on gradients of up to 6‰ and trains and 6300 tonnes on gradients of up to 10‰. The locomotive was certified for operation on Russia's national network in 2014 and subsequently underwent testing on the Gorky Railway.