The locomotive will initially be tested on yard duties before being adapted for the main line. 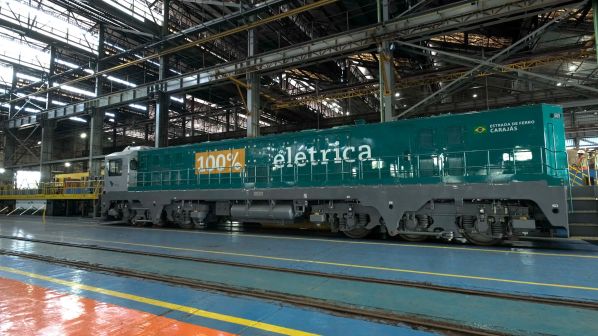 BRAZILIAN operator Vale has received a second battery-equipped electric locomotive as part of a strategy to accelerate the use of renewable technologies. The locomotive, manufactured by CRRC Zhuzhou Locomotive (CRRC ZELC), will initially operate in the Ponta da Madeira yard at São Luís, Maranhão, on Vale’s Carajás Railway (EFC).

The locomotive’s lithium batteries have a storage capacity of 1000kWh, with autonomy to operate up to 10 hours without recharging. Following 90 days of system verification and testing at the workshop in Ponta da Madeira, the first tests in the yard are scheduled for July.

Vale says the CRRC locomotive is part of its strategy to electrify mining and railway equipment, which account for 25% of the company’s direct Scope 1 carbon emissions. In 2019, Vale announced the goal of zeroing its Scope 1 and 2 net emissions by 2050 through investment worth between $US 4bn and $US 6bn.

“The arrival of the electric locomotive at Carajás Railroad is an important milestone for Vale’s zero carbon journey,” says EFC executive manager, Mr João Silva Junior. “We are building a robust plan that will allow us to drastically reduce CO2 emissions from our rail operations. We are increasingly reaffirming our commitment to a more sustainable Vale.”