The locomotive is fitted with a 12-cylinder Evolution Series diesel engine which produces 3.3MW. 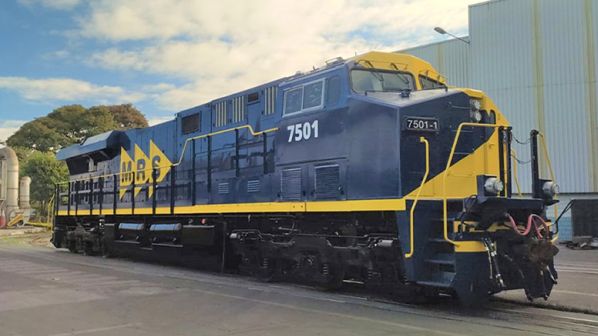 WABTEC will introduce a new locomotive type to Brazil following the delivery of the ES44ACi diesel-electric heavy-haul locomotive to freight operators Suzano, MRS and Rumo in late March and early April. Wabtec has already secured orders for 25 locomotives from the three operators.

“This represents greater energy efficiency and lower emissions, thanks to a project aimed at the thermal efficiency of combustion combined with a dual-intake air cooling system adopted in these four-stroke turbocharged engines equipped with electronic fuel injection,” says Ms Daniela Ornelas, vice-president of products at Wabtec.

This engine technology enables the locomotive to reduce fuel consumption and emissions by more than 5% compared to its predecessor. The high-strength materials used in the ES44ACi should also improve the reliability of the diesel engine and increase major maintenance intervals by approximately 28%, lowering operating costs over the locomotive’s life cycle.

The locomotives, which are assembled at Contagem, Brazil, have been introduced following an eight-year project to improve Brazil’s heavy-haul network and improve sustainability.

“Our sustainability vision is grounded in operating in an ethical and socially responsible manner, maintaining a culture of safety, protecting the environment, and supporting our communities and developing our employees,” said Mr Juliano Andrade, Latam Commercial Director at Wabtec. “This was the main concept applied to the ES44ACi. We therefore want to build a better and more sustainable future.”

Rumo, the largest railway operator in Brazil, will receive the first ES44ACi at the end of March.