WEST Midlands Trains (WMT) and Vivarail have officially signed a contract for the supply of three Class 230 D-Train multiple units, which will begin running on the Bedford - Bletchley Marston Vale line in December following their extensive rebuild at Vivarail’s Long Marston depot in Warwickshire. 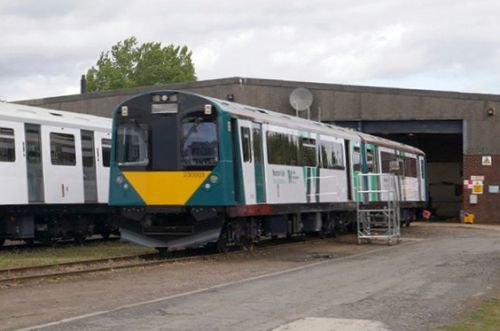 WMT unveiled a new livery for the Class 230s on the Bedford - Bletchley Marston Vale line.

WMT also unveiled the new livery for the trains on August 22.

The first of the trains, 230003, will begin testing over the next few weeks while units 230004 and 230005 will follow shortly. The trains have undergone extensive improvements and will feature universal-access toilets, USB sockets and modern ‘airline’ seating.

The trains, which have been converted from London Underground District Line EMUs, will be supplied as diesel units, with the capability to convert to battery power in the future. The train’s engines will automatically cut-out in stations to improve the passenger environment and cut emissions, while the lightweight aluminium bodyshell reduces fuel consumption.

“I remember these trains from when they were on London Underground, but looking around the units there’s so much new equipment on board that they look and feel like brand new trains,” says WMT managing director, Mr Jan Chaudhry-van der Velde. “Our new LNWR livery is appearing more and more prominently across the network, and we are proud to be able to share this bespoke version of design for the Marston Vale route.”