ABELLIO will be required to use alternative trains on some routes in Baden-Württemberg and subcontract other services to DB Regio following the late delivery of a fleet of 52 Talent 2 EMUs by Bombardier. 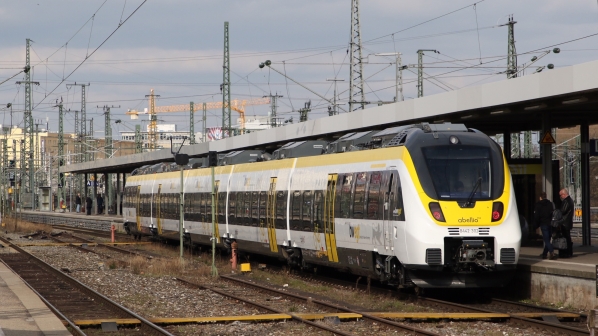 Abellio ordered 26 five-car and 26 three-car EMUs from Bombardier in three batches between 2016 and 2018 to operate services on the Stuttgarter Netze (Neckar Valley) network, after it was awarded a 13-year contract over incumbent operator DB Regio in 2016.

The operation handover and introduction of new trains was split into several stages with services due to be introduced in three phases:

The revised train delivery schedule announced by Abellio in mid-May assumes full Federal Railway Authority (EBA) safety case approval, which has not yet been granted, for the five-car EMUs by June 9. These trains have been tested and used for driver training for several months. Bombardier told Abellio and the Baden-Württemberg state government in May that it expects to have delivered 15 five-car trains by August and all 26 by December.

Bombardier first told Abellio that the new fleet would be delayed in February and, according to Abellio, has since progressively reduced its forecasts of how many will be delivered.

Abellio said in a press statement that the further delay was not a surprise and that this is the third revised delivery schedule offered by the manufacturer this year. Abellio says it has made plans to lease alternative trains from several sources and will sub-contract operation of Stuttgart - Heilbronn services to DB Regio from December for ‘several months.’