A tripartite memorandum of understanding was signed in Yerevan on January 24 concerning the construction of the Southern Armenia Railway, which will form part of a new north-south corridor linking the Black Sea and the Persian Gulf. 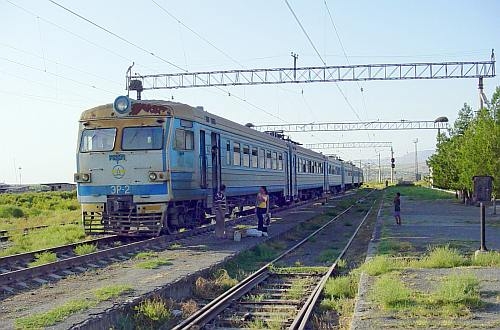 Armenian trains now run only as far as Yeraskh on the former through route between Yerevan and Jolfa, Iran. The construction of the Armenian Southern Railway will restore rail links between the two countries.
Photo Credit: Jan Pešula

The MoU covers the construction of both a 316km railway linking Gavar, 50km east of Yerevan near Lake Sevar, with the Iranian border near Meghri, and a 110km highway in the southern province of Syunik. The total cost of the two projects is expected to be around $US 3bn.

In 2012 Rasia FZE signed two concession agreements with the Armenian government to develop these projects on a PPP basis. The concessions set deadlines for completing feasibility studies, engineering design, project financing, and construction, and both have an operating term of 30 years with an option for a 20 year extension. Feasibility studies began at the end of December, and Rasia FZE has appointed China Communications Construction Company as the "lead member of the development consortium" for the project.

The line will be operated by SCR, which was awarded a 30-year operating concession for Armenia's 1520mm-gauge national network in February 2008. During the ceremony, Mr Victor Rebets, general director of SCR said RZD has invested more than Drams 90bn ($US 225m) in its Armenian operations since it won the concession.

At present the only rail connection between Armenia and Iran is the line which passes through the autonomous region of Nakhchivan, an exclave of Azerbaijan. However, because the border between the two countries is closed the line from Yerevan is operational only as far as Yeraskh.