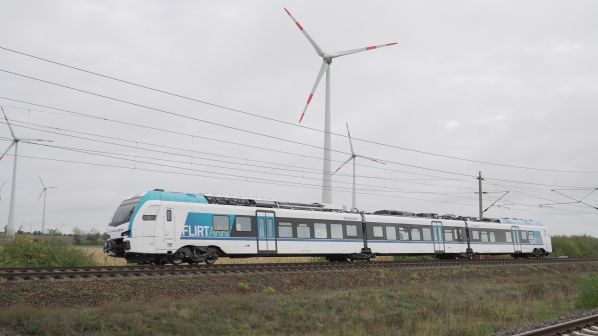 STADLER has successfully completed a three-year research project to test battery operation of a Flirt Akku multiple unit, with the train operating in battery mode continuously without charge for 185km during the tests.

Stadler worked alongside German battery manufacturer, Intilion, to test the technical feasibility of battery capacity for operating railway rolling stock and to gain valuable experience for the future design of rail vehicles.

Specially designed tests verified the feasibility of the battery technology for rail traffic and the limits of installed battery capacity. The Flirt train covered 15,000km in battery operation and the project team emphasised tests of the batteries’ performance in possible operating scenarios such as catching up on unplanned delays and in extreme weather conditions.

“In summer 2019 we tested the Flirt battery train during a heat wave when temperatures reached 40°C outside and the air-conditioning system was in full use, and in the winter of 2021, when temperatures were in double digits below freezing,” says Ms Evelyn Thiel, technical director of the research project at Stadler. “The use in sole battery mode was possible without any restriction and without reaching the lower limits of capacity.”

The project was funded by the Swiss Federal Ministry for Economic Affairs and Energy and the project was developed alongside TU Berlin and EWE. Stadler says it is targeting the development of battery trains to meet demand for emissions free rail vehicles for use on lines where electrification is not economically feasible.

Stadler won a €600m contract to supply 55 two-car 160km/h Flirt Akku BEMUs to Schleswig-Holstein transport authority NAH-SH in October 2019, which will replace DMUs on routes in the state. The company also unveiled a prototype battery Flirt Akku in November 2018, which had a range of 80km without charge.