Nitrogen oxide levels up to 13-times higher than those next to major London roads found on new-build trains. 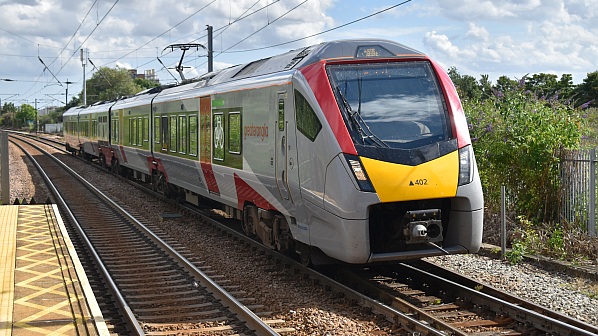 THE British government has launched a review into railway air quality standards and regulations after it discovered that some air quality from diesel trains is poorer than desired.

Research funded by the government and conducted by the independent Rail Safety and Standards Board (RSSB) on six train types found that on-train concentrations of nitrogen dioxide can peak at levels ranging from one to 13-times higher than identified next to major central London roads.

The highest levels of nitrogen oxide were found on Hitachi class 800s operating in diesel mode for Great Western Railway and which were introduced into service from 2017. The peaks most frequently happen when the trains are in tunnels or idling in stations the research discovered.

The industry is now working on more research and potential short-term solutions.

The study found that the highest overall level of particles were found on the London Euston - Birmingham New Street route on-board Bombardier class 221 DEMUs. These levels were found to be significantly higher than typical levels routinely measured at busy urban roadside locations.

The research found four main sources creating the particles. These were the exhaust, passenger movement, brakes or dust from the hard floors and particles entering the train from outside.

It also found that new trains do not necessarily have better on-board air quality than older trains. Trains measured date from 1976 (class 43, although the engines fitted are newer and date from the mid-1990s to mid-2000s) to 2020 (class 755).

The six trains were measured over 30 journeys in both directions of travel between January 13 2020 and March 12 2020. Those used for the research were a four-car Bombardier class 168 DMU on the London Marylebone - Birmingham Snow Hill route, an eight-car British Rail High Speed Train (HST) on the London St Pancras - Nottingham route, a five-car class 221 running between London Euston and Birmingham New Street, and a two-car Vivarail class 230 between Bletchley and Bedford. Additionally two three-car and three four-car Stadler class 755s were tested between Ipswich and Cambridge, and one five-car, two nine-car and two 10-car class 800s were tested between London Paddington and Bristol Temple Meads.

Journey times ranged from 1h 13min to 5hr 42min, with the equipment used located in the same coach in both directions.

Planned testing of a South Western Railway (SWR) class 159 DMU, an SWR Siemens class 444 dc EMU, and a ScotRail Hitachi class 385 ac EMU had to be cancelled due to restrictions introduced at the start of the pandemic.

The report was published on September 16 and states that the quality of air on services remain within legal limits. It also states that cross-industry research is underway to understand the issues raised and to identify both the short and long-term solutions.

However, Britain’s Department for Transport has commissioned a review of all the regulations and standards which currently control air pollution and people’s exposure to it on the rail network. This will cover both at stations and on-board trains.

“The safety of staff and passengers is our absolute priority,” says rail minister Mr Chris Heaton-Harris. While these findings are within limits, I do not believe people should have to accept anything less than the highest levels of air quality.

“I have asked the industry to immediately conduct further research and explore all engineering modifications and options to rapidly improve air quality on trains and in stations.

“I have also launched a comprehensive review of the current standards and guidance related to air quality on the rail network. If required, we will not hesitate to strengthen legislation to ensure the highest standards of air quality are met and maintained.”

Since the research was completed, the HSTs used have been withdrawn from traffic by East Midlands Railway.