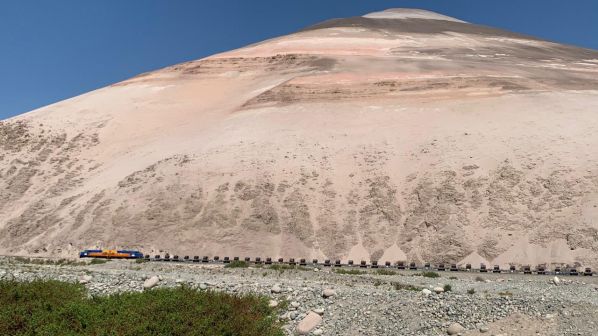 THE first train in 15 years to traverse the entire 206km Chilean section of the Arica - La Paz Railway (FCALP) was flagged off at the port of Arica on May 5.

Chile has kept the metre-gauge line fully operational in compliance with the terms of a 1904 treaty with Bolivia to maintain access to the railway to support exports from the land-locked country. The launch of the new service is a result of interest from Bolivian operator Andean Railway in sending and receiving freight to and from the port of Arica as an alternative to Antofagasta.

Work has taken place over the past two years between FCALP and Arica Port Company (EPA) along with Chilean State Railways (EFE), to reactivate the line, with the pilot on May 5 the culmination of these efforts.

The first train is hauling 480 tonnes of imported steel on the outbound leg of the journey and will return with 480 tonnes of soya.

While there is hope that regular cross-border operation will resume, any future rail service on the route will have to compete with effectively subsidised lorries using the CH-11 highway, which also runs from Arica up to the Bolivian High Plain.

The railway first entered service in 1913 and remained in operation until February 6 2001, when part of the track was destroyed by flooding of the Lluta river in Chile. This led to a closure of the line in November 2005 and the subsequent bankruptcy of the railway. However, with this failing to observe the spirit of the 1904 treaty, reactivation was sought.