TRACKLAYING has commenced on the Laotian section of the China - Laos railway as the project enters its final stages. 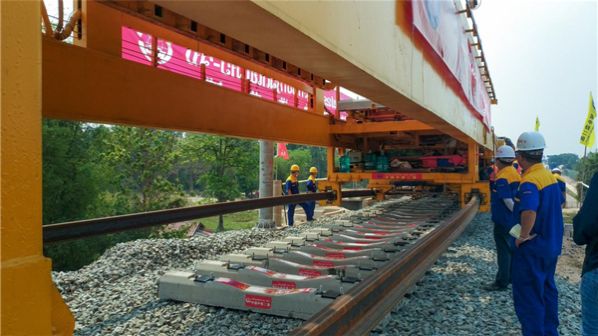 Tracklaying on the Laotian section of the project commenced on March 27.
Photo Credit: China Railway/Xu Delin

At 10.30 on March 27 a 500m-long steel rail was steadily lowered into position on the line on the outskirts of the Laotian capital, Vientiane, marking a key milestone in the project, construction of which was launched on January 1 2017.

The 414km standard-gauge single-track electrified line runs south from the China-Laos border at Boten to Luang Prabang, Vang Vieng and Vientiane. The line will connect China’s Yuxi - Mohan line with the metre-gauge line from Tha Na Laeng near Vientiane to Nong Khai and Bangkok.

Civil works were completed at the end of 2019 and more than 10,000 workers remained active on the project during the Chinese Spring Festival. Construction was optimised in light of the coronavirus pandemic with prevention and control measures implemented.

Civil engineering works including bridges and tunnels are now in their final stages while work on the line’s four power stations and station construction has begun and China Railway says the project is on course for completion and to begin operating international services by the end of 2021.

China regards the project as a key element of its Belt and Road initiative. China is funding construction and the project has adopted Chinese technology throughout.