CONSTRUCTION on the Reais 15bn ($US 2.6bn) São Paulo metro Line 6-Orange has resumed, after the University Line Participants consortium led by Acciona, Spain, took over the construction and operation of the public-private partnership (PPP) contract. 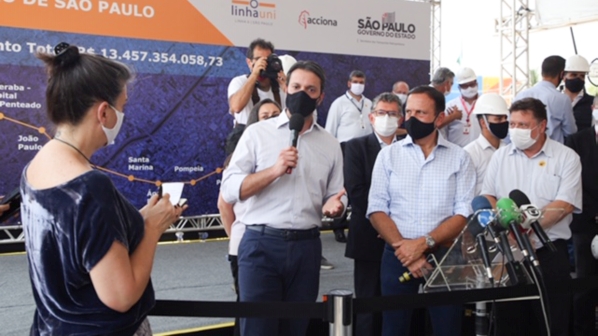 A ceremony to mark the resumption of work held on October 6 was attended by São Paulo governor, Mr João Doria, a day after the signing of an agreement with the State of São Paulo, the Move Consortium, comprising Odebrecht, Queiroz Galvão, UTC Participações and investment fund Eco Reality, and the University Line Participants consortium.

Work on the 15km underground line started in April 2015, but was halted in August 2016 when some of the original contractors from the Move Consortium became embroiled in the Lava Jato (“Car Wash”) anti-corruption operation. The consortium, which was required to fund half of the construction costs and operate the line for 25 years under the terms of the PPP, also complained of financial difficulties. The consortium’s contract was subsequently cancelled in 2018.

The government of São Paulo announced in February that it had decided to proceed with the offer from Acciona to continue the project.

Line 6 will include 15 metro stations, connecting the centre of the capital to the city’s northwest corner, crossing through several neighbourhoods where some of São Paulo’s main universities are located. Once complete, it will serve 600,000 passengers per day.

The line will interchange with metro lines 1 and 4 and CPTM commuter rail lines 7 and 8, and will reduce the end-to-end journey time from 1h 30min by bus to 23 minutes.

“The completion of the works is scheduled for 2025 and now we have no reason to doubt its continuity and compliance with this deadline,” Doria says. “This was extensively studied by the Metro team and the Acciona team, so that this deadline can be met. There is no more obstacle of a legal nature, neither administrative, nor institutional, nor a lack of resources.”