GERMAN Rail (DB) presented the first of 17 refurbished former Westbahn Stadler Kiss double-deck EMUs at Berlin Main Station on February 6 ahead of the introduction of nine trains on the Rostock - Berlin - Dresden inter-city route on March 8. 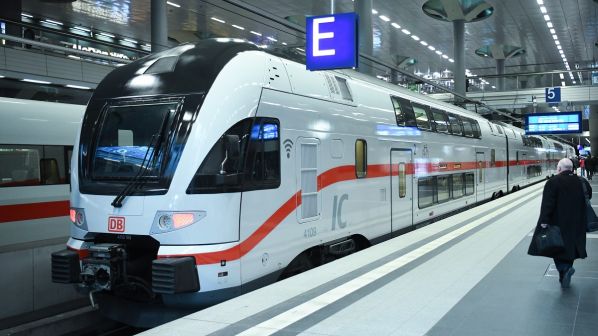 DB confirmed the purchase of the seven class 4010 six-car Kiss 1 and 10 class 4110 four-car Kiss 2 vehicles in July. The trains will support a two-hour interval service on Rostock - Berlin - Dresden route, which was due to be served by 69 IC2 inter-city push-pull trains on order from Bombardier. However, DB suspended delivery of the remaining 25 trains last week after a series of reliability issues reportedly caused by software-related problems.

Expansion of the Rostock - Berlin - Dresden service is part of DB’s ‘Strong Rail’ strategy to double long-distance passenger rail journeys to 260 million customers per year. The purchase of the Kiss Fleet is part of an €8.5bn investment in DB’s long-distance fleet, which as well as the IC2, also includes orders for additional ICE 4 trains and intermediate vehicles from Siemens, a contract with Talgo for 100 long-distance trains and new tenders for 30 high-speed trains and 90 high-speed EMUs.

Westbahn CEO Dr Erich Forster told IRJ that the company decided to sell the trains because the economic conditions for the purchase of the Kiss 1 trains in 2009 at the height of the economic crisis were no longer favourable for the open-access operator. Westbahn subsequently ordered further Kiss EMUs from Stadler, the first of which will be delivered in 2021.

The 200km/h refurbished four-car EMUs feature Wi-Fi, a reservation system, modern passenger information systems, and storage space for luggage and eight bicycles. Each train has 300 seats and possess panoramic windows on the upper deck while passengers can purchase drinks and snacks in two onboard cafes. Wheelchair access is possible via a ramp and there are two wheelchair spaces as well as a disabled toilet.