DB’s contract begins in December and it will use refurbished Coradia Continental EMUs on the route from March 2023. 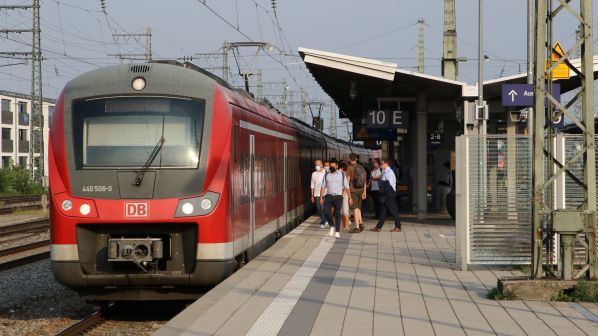 THE state government of Baden-Württemberg has announced that DB Regio will operate the new RB63 Herrenberg - Bad Urach route from December 2022 using the newly electrified 21.4km Ammer Valley Railway from Herrenberg to Tübingen, and the 10.4km Erms Valley Railway from Metzingen to Bad Urach. The Tübingen - Metzingen section is already electrified as part of the through route from Tübingen to Stuttgart.

DB will offer a half-hourly frequency on weekdays, reduced to hourly at weekends. The contract calls for the operation of 1.46 million train-km per year and will run until December 2035 although it can be terminated in whole or for the Reutlingen – Bad Urach section from December 2030. This option is available if the planned tram-train system for the area progresses and if plans to equip the Stuttgart - Tübingen route with ETCS materialise, which would require new or retro-fitted rolling stock.

The €122m project to upgrade the route began in late 2020 and involved installing 15kV ac electrification and some double track sections on the Ammer Valley Railway. Four new stations will also be built between Metzingen and Tübingen, which will be served by new electric Tübingen - Bad Urach services.

Both regional lines reopened in 1999 following closure by German Rail (DB) and are now independently owned: the Ammer Valley Railway by Zweckverband ÖPNV im Ammertal which is held 80:20 by the local governments in Tübingen and Böblingen; and Erms Valley Railway by the independent Erms-Neckar-Bahn (Enag) since 1994.

DB Regio will initially use the line’s existing class 650 Stadler Regioshuttle DMU fleet but plans to replace these with Alstom Continental Coradia class 440 EMUs used in Bavaria, which will become redundant when GoAhead takes over operation of Munich - Augsburg services using a new fleet of trains in December.

The fleet will be refurbished with Wi-Fi, stop request buttons and given the new standard Baden-Württemberg ‘bwegt’ white and yellow external livery.