The line was blocked by a landslide on March 15, with DB aiming to reopen the line by the end of April. 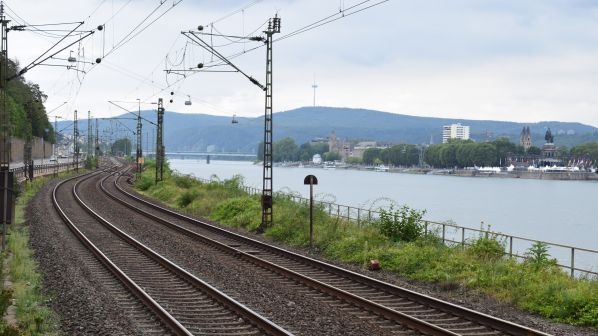 The line on the eastern side the Rhine river is closed south of Koblenz.
Photo Credit: Shutterstock

THE double-track Mannheim - Cologne line on the eastern side of the Rhine River, which forms part of the Rhine-Alpine European freight corridor, could remain closed for weeks following a landslide near Kestert in Rhineland-Palatinate on March 15 that spread rocks across the busy line.

Infrastructure manager DB Networks has deployed helicopters and excavators at the site, working with geologists and climbers to remove material and stabilise the cliff above the line, which forms one of the busiest rail freight corridors in Europe.

The team has so far carried out six blasting operations to clear additional rubble from the mountain above the line. DB announced on April 26 that following detailed geological investigations, another 2000m3 of loose rock will have to removed.

“We are working flat out to stabilise the rock,” says DB Networks member of the Management Board for facilities and maintenance management, Dr Volker Hentschel. “Of course we want the trains on the right bank of the Rhine to start running again as soon as possible. But first of all, safety must be ensured. We expect to be able to resume operations before the end of April.”

Specialists, including geologists and industrial climbers, are continuing to work on the steep slope, which is difficult to access. After more blasting operations to remove additional rock, the slope will be secured with nets. In order to install these, a specialist team will place 620 anchors in the rock, each of which requires a drilled hole up to 9m deep. The nets will cover two areas that are 1000m2 and 1100m2 respectively.

The tracks will then be cleared of debris, repaired if necessary, and put back into operation.

“Here in the Rhine Valley, we are mainly dealing with slate rocks as well as claystone, siltstone and sandstones,” says consulting geologist, Dr Jürgen Matthesius. “These geological conditions require special care and expertise in everything we do. To avoid putting more stress on the slope above the tracks, we are proceeding extremely carefully. That means no big blasts, but several small blasts for the stable slope. This is also gentler on the flora and fauna.”

The Loreley - Kamp-Bornhofen line remains closed in both directions, with DB diverting some traffic onto the line on the western bank of the Rhine via Bingen. The timetable has been updated to allow an additional 20 freight trains to operate per direction on the line each day.

However, the Network of European Railways (NEE) said DB needed to give more importance to freight trains disrupted by the line closure, by giving them more priority over passenger services. Some services were being rerouted via Siegen, Saarbrücken and Kassel, adding up to 300km to the journeys which was having a knock-on effect on other services and impacting the operators’ ability to meet customer demands.

NEE has called for an international disruption to be declared under Handbook for International Contingency Management (ICM) guidelines. The guidelines were developed after services on the Rhine Valley Line were severely disrupted for nearly two months in 2017 after a tunnel beneath the town of Rastatt, which is part of the Karlsruhe - Basle upgrade, collapsed.