ETCS due to come into use on the Northern City line from next year. 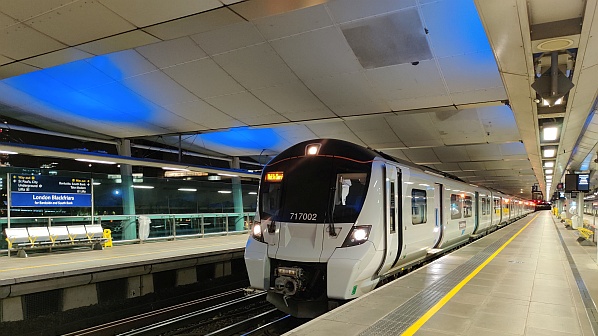 This is ahead of the planned transition to ETCS in summer 2022 on the Northern City Line from south of Finsbury Park to Moorgate, which is operated by the class 717s. British infrastructure manager Network Rail plans to switch off conventional signalling on the 5.5km line in 2023.

The six-car EMU operated using an upgraded baseline of the current ETCS system fitted to a Siemens class 700 EMUs (3.4.0 onboard over 2.3.0d trackside), through the Thameslink core section between St Pancras International low level and Blackfriars station, a distance of 3.2km.

The class 717 fleet is already fitted with ETCS, but this is the first time it had been tested on NR infrastructure across this specification. The ‘core’ is already equipped with ETCS.

“This is the first time a train of this specification has been tested dynamically, in the real world, against the infrastructure specification,” says Mr Toufic Machnouk, NR director industry partnership digital. “It represents a small but significant step for the East Coast Digital Programme and is a crucial point of confidence for a smooth migration to ETCS operation, delivering progressive benefits to passengers.”

Longer-term, NR is working on introducing digital signalling on the southern section of the East Coast Main Line from London to Stoke Tunnels, north of Peterborough. The 160km section is due to be completed by the end of March 2029.