The agreement establishes a framework for the exchange of services, training, and knowledge transfer. 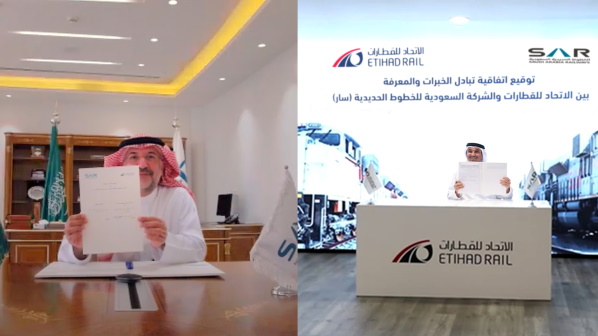 ETIHAD Rail, the developer and operator of the UAE’s national railway network, and the Saudi Railway Company (SAR), have signed a strategic cooperation agreement establishing a framework for the exchange of services, training, and knowledge transfer.

The agreement was signed by Dr Bashar Al Malik, CEO of SAR, and Mr Shadi Malak, CEO of Etihad Rail, during a virtual ceremony attended by officials from both organisations.

The agreement focuses on four key areas of cooperation, including:

The agreement also supports cooperation on the training of engineers and students to develop competencies in various technical fields, and the identification of future initiatives, including in the fields of technology and procurement, the modernisation of training criteria, maintenance time optimisation and other programmes to enhance information exchange.

“Our expertise in rail operations, coupled with the strong presence of UAE talent across our company, will foster and enhance the transfer of knowledge with our colleagues in Saudi Arabia,” Malak says. “Through this partnership, we look to enable our mutual development, further aligning to the requirements of this ambitious project.”

“Our agreement comes following the strategic and fraternal relationship between the Kingdom of Saudi Arabia and the UAE,” Malik says. “We share deep historical ties and a bold vision for the future, reinforced by our similar outlook on a range of different viewpoints. Such a partnership is nurtured by our nations’ continued cooperation, and our mutual vision for the integration of our transportation sectors.

“This is particularly pertinent for the rail sector, which offers a pivotal role in wider social and economic development. Our partnership with Etihad Rail demonstrates the Saudi Railway Company’s integral role in the development of the Kingdom of Saudi Arabia, working to achieve the targets of Vision 2030 and provide a global logistic service for the Kingdom.”

The agreement comes at a time when both countries are developing ambitious railway projects intended to better connect major urban centres, ports and manufacturing centres in the region. Etihad Rail began construction of Stage 2 of the UAE’s approximately 1200km national rail network project in early 2020, following the opening of the 264km Shah - Ruwais Phase 1 in January 2016. Under Phase 2a of the project, the line will run 139km west from Ruwais to the Saudi border at Ghuweifat, with a view to connecting to the future Saudi portion of the 2177km Gulf Railway project, which aims to develop an interconnected rail network between all six Gulf Cooperation Council (GCC) member states (Bahrain, Kuwait, Oman, Qatar, Saudi Arabia, and the UAE) at an estimated cost of $US 250bn.

SAR is Saudi Arabia’s sole state railway company, following the merger of Saudi Railways Organisation (SRO) into SAR and is also working to implement a range of rail projects as part of the Saudi government’s Vision 2030 economic plan. This includes a planned 115km line between Jubail and Dammam and the 950km Saudi Landbridge project between Riyadh and Jeddah, which have a combined cost of around $US 7bn.