The vehicle is due to be delivered to TCDD from next year. 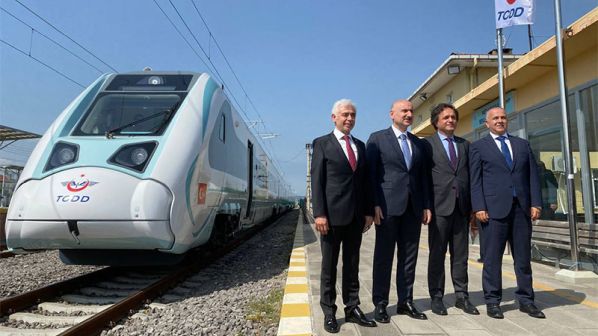 The train features an aluminium body, which is designed to operate at up to 160km/h.
Photo Credit: TCDD

TURKISH Rail System Vehicles Industry (Türasaş) has begun the final tests on its first locally produced 160km/h five-car EMU, which will be delivered to Turkish State Railway (TCDD) from next year.

Türasaş was created in March 2020 following the merger between the manufacturers Tülomsaş, Tüdemsaş and Tüvasaş. The company says it plans to produce the trains for domestic operation and is also looking to export them to the European market.

The prototype vehicle was 65% locally produced, but Türasaş plans to increase this to 75% during mass production. The trains have an aluminium body, which was manufactured at a new facility in Sakarya, which was inaugurated in June 2019.

The EMU has capacity for 324 passengers including two spaces for passengers with reduced mobility, and five toilets, including one which is fully accessible. Each car has a driving bogie and a non-driving bogie, with an axle load of up to 18 tonnes. The trains operate under 25kv 50hz ac electrification, with ac/ac traction motors.