EUROSTAR operated the inaugural direct Amsterdam - London high-speed service on February 4, ahead of the start of commercial services between the two capitals on April 30. 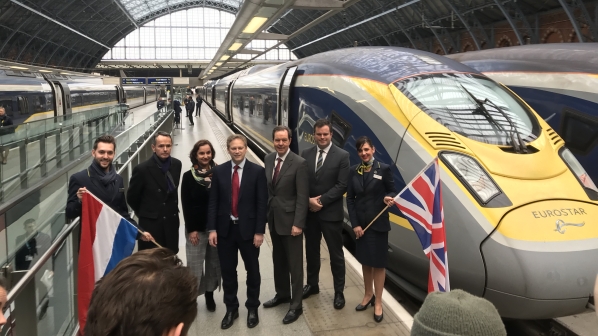 The train left Amsterdam Central at 07.48 and was waved off by Dutch secretary of state for security and justice, Ms Ankie Broekers-Knol, minister of infrastructure and water management, Ms Cora van Nieuwenhuizen, along with Mr Roger van Boxtel, CEO of Netherlands Railways (NS), and Mr Mike Cooper, CEO of Eurostar.

The train subsequently called at Rotterdam (08.26) and Brussels Midi (09.40) and arrived at London St Pancras at 11.01, three minutes behind its scheduled arrival of 10.58, which would offer a journey time of 4h 9min. The train was greeted in London by Britain’s secretary of state for transport, Mr Grant Shapps.

Eurostar already operates three direct London - Amsterdam trains, carrying 570,000 passengers since the start of these services in April 2018. However, return passengers have been required to disembark in Brussels for passport checks, extending the total journey time to 5h 23min.

Initially Eurostar will offer two direct Amsterdam - London journeys per day with passengers able to board the service in Rotterdam from May 18. The plan is to increase the frequency of services to three to four trains by the end of 2020 and eventually five trains. Tickets will go on sale on February 11 and start at €35 one-way.

“On Paris - London we have a 75% market share whereas we currently have a 12% market share on Amsterdam - London,” Cooper told IRJ onboard the inaugural service. “The intention is to bridge that gap, although we won’t get to 75% because it’s not a two-and-a-half-hour journey, it’s a 4h 9min journey, but we will get an increasing penetration.”

Eurostar is promoting the service as a sustainable transport choice with Cooper stating that using the train accounts for 80% less CO2 emissions than an equivalent air journey. The operator will also plant a tree for every service that departs in 2020 in either Britain, France, Belgium and the Netherlands to underline its green credentials.

Cooper says Eurostar would have liked to announce the introduction of a third and fourth service, but was unable to do so because of limitations imposed by border control authorities. The negotiation of a four-country treaty for border controls and delays with the introduction of border control facilities in the Netherlands held up the start of the direct service. However, Cooper says he is encouraged by the words of Broekers-Knol during the launch in Amsterdam. Brokers-Knol said that she is intent very soon to secure the agreement required for the extra resources to enable Eurostar to increase the frequency to three or four trains per day.

“Then we will pause, because these are big beasts, and filling four services per day will take some time to grow, but as we grow and fill these services, we will think about the fifth and go thereafter,” Cooper says.

As for its next destination, Cooper says the pursuit of a merger with Thalys, which was revealed by both companies in September, will provide Eurostar with access to Germany. “The addition of Amsterdam and Rotterdam direct, and the introduction of Germany with Thalys starts to feel like a pan-European network rather than a slot between Paris and London, and Brussels and London,” Cooper says.

There are also possible opportunities to run regularly to Bordeaux, Geneva and destinations in Spain and even Portugal, as alluded to by Shapps during his speech to greet the service at London St Pancras.

Cooper reports that the merger process is split into three phrases. The first, which is underway, involves the two management teams pulling together their vision for the new network and what it will mean for people in both businesses. The second will involve negotiating terms with both company’s trade union and work council representatives, and the third will require going to Brussels to go through the European Commission’s competition and mergers authority.

“The three phases are likely to pan out until the end of 2020 and early 2021,” Cooper says. “But there is real intent from shareholders and good planning is taking place.”

Whether the new service becomes a single brand is yet to be agreed, according to Cooper, although he says it would be “crazy” not to adopt one as they are both strong and highly recognised. Fleet interoperability is also considered an opportunity of the merger, although Thalys’ current trains would not be able to operate through the Channel Tunnel as operation here is limited to 400m-long sets.

“We are still working with the management teams with multiple work streams taking place,” Cooper says. “It is involving a lot of time and a lot of thought. It is an exciting stage but it is a very, very busy stage. The chemistry between the two teams is good and the culture is very similar too. We are trying to be respectful of one another and go into it as a merger and not a take over.”