DYNAMIC testing of the first Bombardier Omneo Premium double-deck long-distance EMU for the French region of Normandy has begun on the Caen - Lison - Cherbourg line. 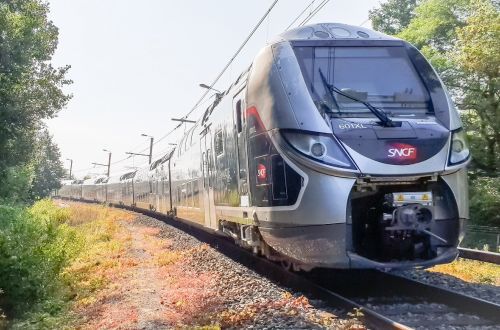 The first train on the test track at Bombardier's Crespin plant. Bombardier

French National Railways (SNCF) placed a €585m order for 40 of the trains on behalf of the region in November 2016 using an option from a framework contract for up to 860 Omneo trains which was awarded to Bombardier in 2010. The order is the first for the 200km/h inter-city variant of the Omneo.

Over the next few months the first train will undergo a programme of tests to validate the performance of the braking system under different load conditions at speeds of up to 200km/h.

The brake test programme, which is being carried out with the support of SNCF’s Railway Test Agency (AEF), is due to continue until mid-November.

A second train is due to visit the VUZ Velim test track in the Czech Republic while a third set will be used to test the operation of onboard systems such as doors.

The French Railway Safety Authority (EPSF) is expected to grant an Authorisation to Place in Service (APS) for the fleet by September 2019, enabling the first trains to enter commercial operation on the Paris - Caen - Cherbourg and Paris Rouen - Le Harve routes in December 2019.