GERMAN Rail (DB) CEO Dr Richard Lutz has urged for further cooperation and a “shared vision” for rail to meet European Union Green Deal targets, following the signing of a declaration of political support for rail freight on September 21. 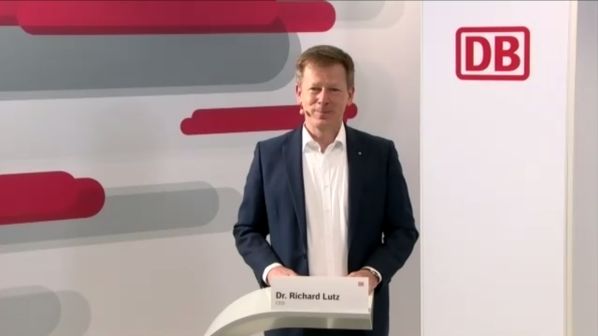 Lutz, who was speaking at the Railway Forum Digital Edition on September 22, emphasised the importance of addressing European rail freight with a clear end vision, focusing especially on the potential uses of technology to improve efficiency and further reduce rail freight’s environmental impact.

“We have to develop the technology of freight wagons at a national and European level,” Lutz told delegates . “For example - and this was part of yesterday’s declaration - digital automatic couplings (DAC) have existed for years, but have never been put into practice in Europe.”

Lutz is hopeful that European rail operators such as DB will become a cornerstone of the continent’s decarbonisation strategy, and says the Berlin Declaration shows that there is a “perfect fit between what we’ve been doing and the European Green Deal.”

However, he warns that the declaration is only the first step. “We can’t just have plans though, we must put it into practice," Lutz said. "We need robust and resilient digital infrastructure for trans-European networks as well as physical infrastructure.”

Lutz also highlighted the necessity to provide “an attractive vision of rail” for passenger services, which should include the expansion of cross-border express and overnight services to improve connectivity between cities as an alternative to short-haul flights.

Getting the word out

For Lutz, cooperation between politicians, operators and other groups is key to building momentum for change in the rail sector. He credited the success of the German rail sector in recent years in areas such as the reduction in carbon output, and a willingness for operators to cooperate with each other.

“In the next year we have the European Year of Rail, and we should make use of this to further develop our interests at a European level,” he says. “If European networks are slow to develop, then that’s a good reason for working together.”

In recent years, DB has reduced its CO2 output by 70%, and plans to reach carbon neutrality by 2038, when all non-electrified infrastructure is replaced with renewable alternatives. He suggests that similar successes could be achieved in other parts of Europe using the same method.

Lutz also emphasised the importance of effectively communicating rail’s green credentials to politicians. He credits the effectiveness of DB’s ‘This is Green’ campaign, which it uses as part of all external and internal communication, as a key reason why Germany’s railways are now experiencing previously unprecedented levels of government investment.

“We shouted about availability for passenger travel, how to reorganise logistics, we started discussions about what we need, such as extensions to infrastructure and the enabling of a modal shift,” he says.