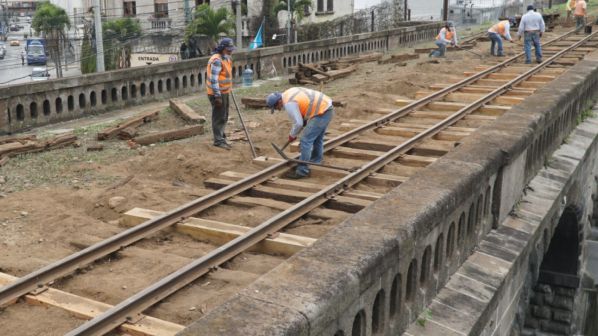 COMBINED operation of freight and passenger trains are economically feasible on the proposed 274km double-track railway between Tecún Umán and Guatemala City, a group studying the project has concluded.

The Central American Bank for Economic Integration (Cabei), the Guatemalan Ministry of Public Finance, and Guatemala Railway (Fegua) are supporting the $US 466,900 pre-feasibility study, which is funded by Korea, and is being executed by Korea Exim Bank under a contract awarded in January. This is the first such scheme under the Korean Ministry of Economy and Finance’s Knowledge Exchange Programme (KSP) with Cabei. The preliminary findings were revealed during a KSP seminar held in Guatemala City on October 27.

The full pre-feasibility study will reveal the current conditions of railway infrastructure in Guatemala, which ceased operation of its 788km 914mm-gauge network in 2007, as well as the current and future demand for freight, connections with neighbouring countries and the legal issues that might relate to implementation of the project.

“Implementation of the project would cause positive economic effects, impacting job creation, revitalising the local economy and reducing operating and transport costs,” says Mr Junghwa Seo, director of the department of multilateral development banks at Korea Eximbank. “It is important that Guatemala establish the routes in stages for the transport of freight and to connect centrally located stations under a National Rail Master Plan.”

Cabei, with the support of the Korean government as an extra regional partner, is currently facilitating similar studies to revive railways in neighbouring countries in Central America, notably El Salvador, Costa Rica and the Dominican Republic. It is hoped that this work will provide the foundation for the development of an effective national and cross-border freight railway network in the region.

Fegua remains as an autonomous state entity in charge of the recovery, protection and safeguarding of railway assets and Fegua controller, Mr Agusto Ponce, says he recognises the importance of the study to open up Guatemala to the railway management expertise it “so badly needs.”

“We thank Korea and its various ministries and institutions, and Cabei for the development of such an in-depth railway study, which offers high potential in social, economic and financial terms to would improve the country's logistical mobility, competitiveness and the way of traveling once the project becomes a reality,” says Ms Rosa María Ortega, director of public credit at MINFIN.