Hydrogen train runs under own power in northern France

Alstom demonstrates Coradia iLint at its test centre ahead of 2022 main line trials. 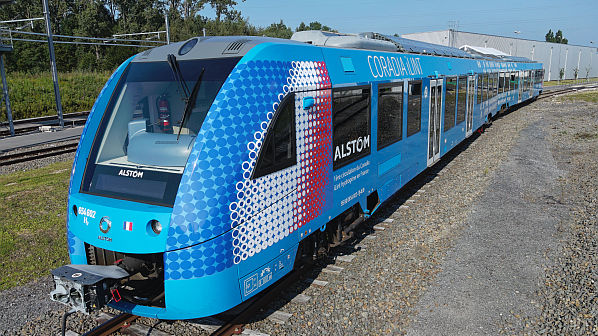 ALSTOM'S Coradia iLint hydrogen train ran under its own power in northern France on September 6/7, at the Railway Test Centre in Valenciennes.

French transport minister Mr Jean-Baptiste Djebarri and president of Alstom France Mr Jean-Baptiste Eyméoud both attended the event, which was staged for the manufacturer to present its train to local stakeholders including government decision-makers, transport authorities, engineering companies and operators.

Coradia iLint trains powered by hydrogen are already in traffic in Germany, and this demonstration was part of the national energy transition ambition says Alstom. This aims to reduce greenhouse gas emissions (gHg) and noise; challenges laid down by the French government in its hydrogen plan initiated in 2018.

Around 40% of the French rail network is not electrified and services are currently operated by straight diesel multiple units or bi-mode diesel/electric (1500 V DC and 25 kV AC by overhead wires) units. SNCF has the biggest fleet of bi-mode units in the world.

“Today, Alstom’s ambition is to accelerate its hydrogen strategy and to continue to propose and develop innovative green solutions,” says Eyméoud. “We want to provide public authorities and operators with relevant technical and economic solutions in the context of the phase-out of diesel.”

The iLint two-car multiple unit used in northern France is the second of two demonstrators, built on the basis of the Lint diesel multiple unit design, built by Alstom at its plant in Salzgitter, Germany. Around 1000 of the diesel version have been built. The first demonstrator was revealed at Innotrans in Berlin in September 2016.

The iLint used was in a German configuration and Alstom says modifications will be necessary to approve the Coradia iLint according to French standards. The approval process has been initiated.

In 2022 one of the demonstrators will return to France for authorisation on the French network, and will then be tested in service on the 48 km single track line from Tours to Loches in the Centre-Val-de-Loire region.

The demonstration was also part of the French Recovery Plan and of the Important Projects of Common European Interest (IPCEI) launched by the European Union in 2020.

The first two 100% H2 iLint trains entered commercial service in Germany three years ago and so far, 41 trains have been ordered by two German states while successful trials have been undertaken in Austria, the Netherlands, Sweden and now France.