D-Trains could be set for use in two more continents. 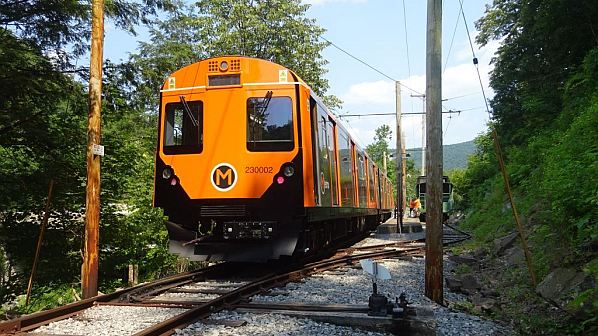 Railroad Development Corporation (RDC) chairman Mr Henry Posner III, speaking exclusively to IRJ at the Railtex/Infrarail trade show in Birmingham, Britain, on September 7, explained that there are plenty of examples of where freight railroads have sold or leased their rights of way for commuter rail and other operations while retaining the right to run freight trains. “Some are very interested,” Posner says,

RDC is a shareholder in British company Vivarail, which is building the class 230s using redundant former London Underground trains. They are in use in Britain with one operator, and about to enter service with two more.

Trials with the trains are taking place on the 2.9km Shade Gap Branch of the East Broad Top Railroad and Posner also told IRJ that more than one class 230 will operate in the United States. “We’re going to need more than one,” he says. “I am trying to not think that far ahead [in terms of how many are needed] because there are so many possibilities, and we don’t want to over or under promise ourselves.”

He also says that the project remains a British export. “There is a tremendous investment in intellectual property ranging from how to do the conversion to fast charge technology to the temporary platforms,” Posner says. “It’s our plan to export the UK intellectual property that we have developed together into the US market.”

Posner added that work has not been undertaken on a United States train for similar work.

As for other markets, Posner confirms that in addition to North America and Britain there are other options. “Keep in mind we’re in four countries in Latin America, two countries in Africa,” he says. “We need to prove the concept works.”

The Biden administration’s desire to invest in infrastructure, including significant amounts in rail, also provides options. “To decarbonise you can resurrect a railroad, you can get investment through various corporations. And you're taking more goals for the for the public sector,” Posner says. “This is the Biden era.”

Posner also tells IRJ how quickly trains could be available, although he stops short of confirming a long-term roll-out plan. He says the company would take the train to a planned “Pop-Up Metro” location within 30 days of an order being made.

“I would not want to paint ourselves in any corner as far as what we might do in terms of how we will sequence either which trains go where, or production. But we have proven the ability to produce the trains,” Posner says. “We have an established manufacturing facility in Britain, the intellectual property is proven. And so then it becomes a question of how quickly do you produce the next set of equipment for use in either the UK or the USA?”

When it comes to alternative propulsion, Posner says RDC and Vivarail have been focussed on battery power, and that is the market they believe the United States is interested in, rather than hydrogen.