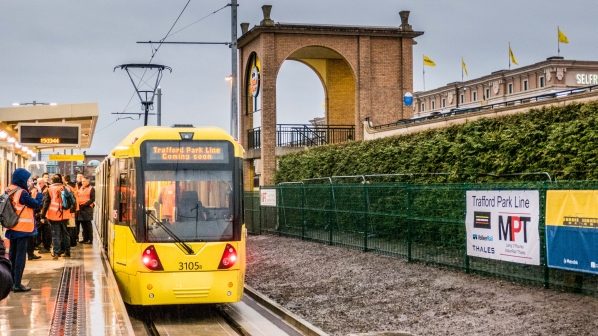 The line opened seven months earlier than planned. Services are operating with a reduced 12 minute headway as part of Metrolink’s efforts to reduce services during the coronavirus pandemic. Passenger numbers across the network have dropped by 90%, as the British government brought in strict controls on movement across the country.

“A project of this size and scale is a huge undertaking and we are pleased at how smoothly it’s come together, meaning we’re opening the line much sooner than we anticipated,” says TfGM chief executive, Mr Eamonn Boylan.

“We’re very pleased to be welcoming passengers on board and opening up the Trafford Park area for workers, shoppers and visitors. I have no doubt it’ll make a huge difference to the area, particularly to the many local businesses.

The line has stops at Wharfside, Imperial War Museum, Village Way, Parkway, Barton Dock Road, and intu Trafford Centre. The network is operated by a KeolisAmey joint venture under a 10-year contract, which commenced in July 2017.

The project was delivered by TfGM, with design and construction partner MPT - a consortium of Laing O’Rourke, VolkerRail and Thales - and delivery partner WSP.

The new line is part of Greater Manchester’s 10-year ‘Our Network’ plan to develop a London-style transport network. The plan was launched in June 2019 to create an integrated, modern and accessible public transport network.