BRITAIN’s Department for Transport (DfT) has announced the start of a new model of taxpayer support for rail operators and the end of the franchising system for train operation after 24 years. 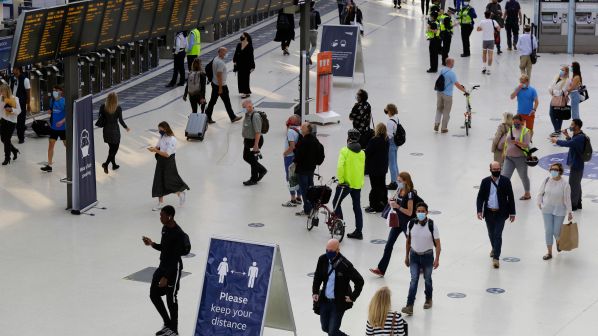 Passenger numbers have only recovered to around 30% of pre pandemic levels on Britain's rail network.
Photo Credit: Shutterstock.com

Under the Emergency Recovery Management Agreements (ERMA), which are in effect from September 20 the taxpayer will make-up any shortfalls in revenue reported by the sector, which is currently around £500m a month, for up to 18 months until March 2022.

Ridership on Britain’s network fell to less than 10% of pre-pandemic levels as the country entered a comprehensive lockdown in March. Patronage has since recovered to around 30%. While demand is stifled, operators are still required to provide an almost full timetable. Capacity remains limited due to social distancing requirements with many trains sold out.

Under the previous Emergency Management Agreements (EMAs) with the franchise operators, which ran for six months and ensured services were able to continue operating during the pandemic, the British government was subsidising the sector by around £700m per month.

The government says today’s announcement is the first stage in creating a simpler, more effective structure for operating Britain’s railway network. Secretary of state for transport, Mr Grant Shapps, envisages a concessions-based system, the full details of which will be revealed in a White Paper, which the DfT says will be published when the course of the pandemic becomes clearer.

The White Paper will respond to the details of the Williams Review. Mr Keith Williams, a former chief executive of British Airways, was tasked with reviewing the rail franchising system following a chaotic timetable change and the failure of some franchises in 2018. The DfT says Williams fully supports today’s announcement.

Under the ERMAs, operators will continue to run an almost full timetable in line with current health guidance, while the ERMAs have tougher performance targets.

The ERMAs include a maximum management fee of 1.5% of the cost base of the franchise system before the pandemic began. This compares with a maximum of 2% under the EMAs and includes a fixed payment as well as an additional performance-based fee based on measures including punctuality, passenger satisfaction and financial performance. The DfT will also continue to waive the operator’s revenue, cost and contingent capital risk.

The ERMAs also require that the train operators agree with the DfT whether, and if so, how much parent company support or other payments are required to terminate the pre-existing franchise agreements by mid-December.

If the termination sums are agreed, they would be enforced at the end of the ERMA term, at which point the pre-existing franchise agreement would also terminate by agreement. However, if the termination sum cannot be agreed, then the DfT has the right to terminate that ERMA early with the operator reverting to substantially all of the pre-existing franchise terms from mid-January 2021. If the fees are agreed, the DfT plans to negotiate a new direct award contract under which the operator will deliver passenger rail services following the end of the ERMA.

Among the targets for customer services that the DfT would like to see at stations served by multiple operators is the creation of a single station team of staff who can help passengers whether they are using their services or those provided by another operator. Updates that simplify the fragmented and complicated national ticketing system are also foreseen during the 18-month period.

The new arrangement could see the operators make around £100m in fees over the course of the 18-month period. Some operators had reportedly threatened to walk away from their contracts if the fee was too low, which would have led to nationalisation of the routes by the DfT.

“Our new deal… will keep the best elements of the private sector, including competition and investment, that have helped to drive growth - but deliver strategic direction, leadership and accountability,” Shapps says.

“These transitional contracts should be a stepping-stone to a better railway,” Plummer says. “This needs to harness the experience, innovation and investment private sector operators bring, with local train companies taking the decisions that affect their passengers. It should be overseen by a new guiding mind for the whole industry and underpinned by a simpler to use fares system.”