SCHLESWIG-Holstein transport authority NAH.SH has selected Stadler as preferred bidder for a contract to supply and maintain a fleet of 55 Flirt Akku battery-electric multiple units for operation on regional lines in the German state. 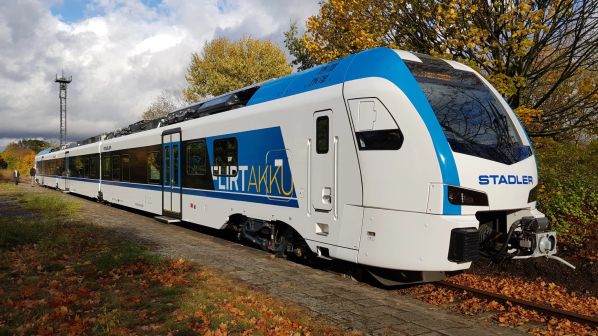 NAH.SH launched a tender in August 2016 for a contract to supply trains equipped with an alternative traction system to replace diesel trains on non-electrified routes.

The contract, worth around €600m, was signed following a 10-day standstill period, and includes an option for 50 additional vehicles.

The order is the first for the Flirt Akku, which was unveiled by Stadler in October 2018.

The trains will be introduced in December 2022 and the fleet will replace DMUs on the following routes:

Each two-car set will seat 124 passengers.

The trains will have a catenary-free range of 150km. Charging will take place using existing electrification at stations such as Kiel, Neumünster, Flensburg, Lübeck and Lüneburg as well as between Osterrönfeld and Jübek.

As part of the contract Stadler will maintain the fleet for 30 years. Dedicated maintenance facilities will be established at Rendsburg and Neumünster.