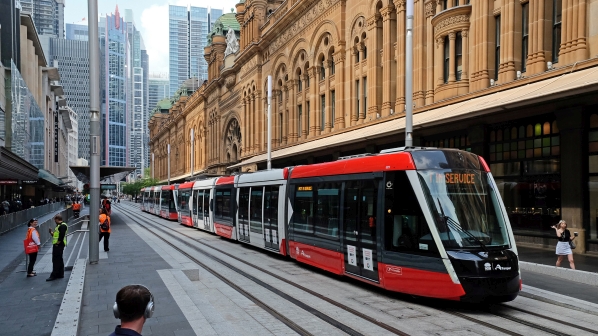 The route, including the L3 extension to Kinsgford, will feature 19 stops extending from Circular Quay along George Street to Central Station, through Surry Hills to Moore Park and beyond. Work on the L3 branch is behind schedule and this section will not open before March 2020.

Current journey times are reported as significantly slower over the full length or the route than the bus services that light rail has replaced. Transport for NSW has said it is working to improve these times as services are fine-tuned and better integrated into the wider road and transport networks.

The project has not been without controversy, with the original 2014 project cost increasing from $A 1.6bn to at least $A 2.9bn following miscalculations in the business case. Further unbudgeted costs were incurred with the settlement of a claim against the state government from consortium construction partner Acciona alleging “misleading or deceptive conduct” before the signing of the original contracts. The settlement also includes an extension of the consortium’s operating contract, managed by Transdev, for the line from 15 to 17 years.

“It’s an historic day for Sydney as light rail takes passengers down George Street for the first time in 61 years,” Berejiklian says. “The new network will move up to 13,500 commuters an hour during peak times, with one coupled LRV holding 450 passengers, which is equivalent to nine standard buses.”