The two extensions will expand the Red Line to the north and south. 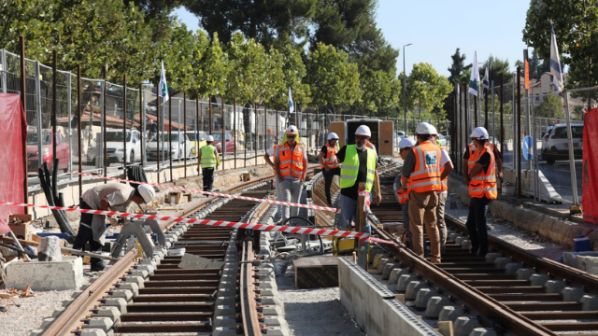 TRACK laying has begun on two extensions of Jerusalem’s Red light rail line, which will add 5.3km and 11 new stops, the first stage of a project to extend the light rail network by 27km with more than 50 stops.

The expansion involves extending the 13.5km Red Line 2.1km north to Neve Ya’akov with four new stations, and 3.2km south to Hadassah Ein Kerem Medical Centre, one of the largest hospitals in the Middle East, with five stations. Two branches will also be built to the university campuses at Mount Scopus and Givat Ram, which will later form part of the Green Line. Construction is due to be completed by the end of 2022 with both extensions due to open in the middle of 2023.

The new tracks were installed on Hentke street in the presence of Jerusalem mayor, Mr Moshe Leon. The Red Line, the first light rail line in Israel, opened in 2011 and now carries around 140,000 passengers a day.

The project is managed by an inter-ministerial tender committee led by the senior deputy to the accountant general at the Ministry of Finance, Mr Yuval Raz, jointly with the ministries of Finance, Transportation, Jerusalem, Inbal and in collaboration with the Transportation Master Plan team, which serves as the professional body responsible for promoting the project.

An agreement to extend the Red Line at each end and build a section of the Green Line was reached by the Israeli government and CityPass, the concessionaire for the Jerusalem light rail network, in August 2017. However, the TransJerusalem J-Net consortium of CAF and Shapir commenced a 15-year concession to operate and expand the Jerusalem light rail network in April 2021, replacing the CityPass consortium.

Construction of the 22km Green line is currently underway, while procurement for the 20km Blue Line has also begun.