PHASE II of Phoenix, Arizona’s 2.6km $US 401.3m Northwest Extension project has been approved by Valley Metro Rail (VMR), with construction expected to begin in August. 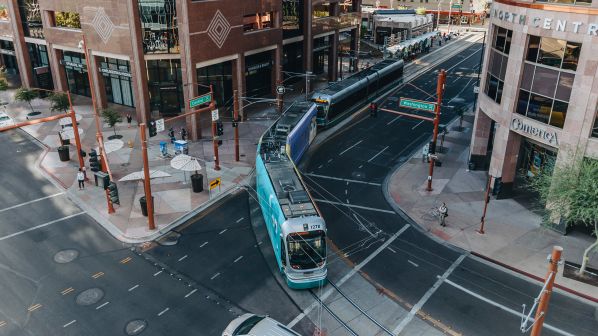 Construction will be carried out by a consortium of Omaha-based Kiewit and local firm McCarthy Building Companies and is scheduled for completion in 2023.

Upon completion, the new line will extend services from the present terminus at 19th Avenue, west via Dunlap Avenue, then North via 25th Avenue and across the I-17 Interstate Highway to a new terminus near the Metrocenter Mall.

The project is an expansion of the 45km light rail network linking Phoenix, Tempe and Mesa. It follows the 2km Phase I Northwest extension which opened in March 2016, which extended light rail north on 19th Avenue from Montebello to Dunlap Avenue.

The project is part of Transportation 2050, a 35-year, multimodal transport strategy plan approved by Phoenix voters to develop public transport systems in the city and increase capacity for a growing population. The population of Phoenix is projected to double to 3.32 million in the next 30 years.

The extension will be part funded by a Federal Transit Authority grant of $US 198.3m as well as $US 173.07m local funding from the City of Phoenix and $US 30m from Maricopa County.

It is hoped that the project will generate hundreds of local jobs, as well as provide economic stimulation for local business. The city plans to launch a workforce development programme for the project later this year.