European railway research was in a bit of a quandary in the 2000s. The steady scaling back or closure of research institutes led by national railways in the 1990s, notably in Britain, France, and Germany, created a vacuum that the industry was struggling to fill. 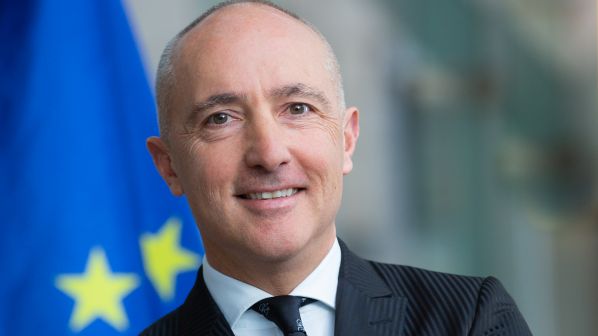 The new joint undertaking will be led by Carlo Borghini.

The International Union of Railways’ (UIC) centralised railway research efforts through the Office for Research and Experiments (ORE) and later the European Rail Research Institute (ERRI), both of which were based in Utrecht, ended in 2004. It was left to the supply industry to lead the push on innovation.

But what is suitable for a competitive marketplace where margins are tight is not always in the interest of wider industry development. Indeed, the European Rail Industry Association (Unife) identified large scale validation of systems, innovative root technology, and the need for a new research and development model as key missing links in the innovation cycle that drives Europe’s rail supply industry. Something had to give.

In the August 2011 edition of IRJ we reported on a plan by a group of European suppliers and Unife members to form a Joint Technology Initiative, which aimed to “achieve a step change in railway research and industry-driven innovation.”

This would later transpire as Shift2Rail, which was adopted by the European Council in 2014 and eventually launched in 2016. Five years later the programme is considered a great success.

Digital Automatic Couplers, virtual coupling, and the Automatic Track Machine Oscillator presented by Plasser & Theurer in February, are all notable Shift2Rail success stories. The results and findings of ATO and telecommunications research are also contributing to upcoming updates to the EU’s Control Command and Signalling Technical Specifications for Interoperability (CCS TSI).

Almost as soon as Shift2Rail got underway discussions began on what could come next. Shift2Rail2 became the working title for the European Rail Partnership, which was formally launched with a call for expressions of interest in August 2020. On February 23, the European Commission (EC) confirmed the proposal to accept Europe’s Rail as a new rail research programme alongside nine others as part of the €10bn Horizon Europe research initiative.

Mr Carlo Borghini has led Shift2Rail as executive director with great enthusiasm since taking on the role in 2016. In my exclusive interview, he tells me how Europe’s Rail is an entirely new programme, with a new structure, and an expanded founding membership. “The idea is to show that we have a major change in our approach,” Borghini says. “We will have railway research and innovation with a much more system-based and holistic approach that is focused on impact.”

Railway research is also set to undergo a major shake-up across the Atlantic.

Ensco says it will support the FRA’s objective to expand TTC as a centre for both rail and ground transport innovation.

Ensco confirmed last month that it is set to enter a $US 571m care, custody and control contract with the Federal Railroad Administration (FRA) to manage the Transportation Technology Center (TTC) in Pueblo, Colorado, for five years from October 2022 with three five-year optional extensions.

The American Association of Railroads (AAR) has managed the facility mostly through its Transportation Technology Centre Inc (TTCI) subsidiary since 1982. TTCI is one of the shining lights in global railway research, predominately serving the North American Class 1s and industry but also working globally - TTCI researchers were regularly seen supporting European railways during the fallow years of research on the continent.

Ensco says it will support the FRA’s objective to expand TTC as a centre for both rail and ground transport innovation. In its request for information to update the facility and its functions in 2019, the FRA hinted at incorporating testing for other US Department of Transportation agencies.

With IRJ’s North American sister publication Railway Age reporting that AAR/TTCI is considering a formal protest to the award, there might be a twist in this story yet. However, the decision to incorporate other modes of transport research into TTC should be considered an opportunity and not something that will dilute the critical railway research that takes place in Pueblo.

Many of the new technologies that will enhance future railway operation such as 5G, AI and autonomous vehicles are pioneered in other industries. Rail, as it has done traditionally, will cherry pick the best and adapt them. Working closely with other researchers leading innovation in these areas - indeed sharing a building with them - could ease this process. It could also help rail to access pockets of research funding from other schemes outside of its immediate remit.

This is Borghini’s hope for Europe’s Rail. The EU’s contribution to the programme was a little short of what the sector was looking for - €1.5bn was regularly cited as an objective for the total budget. However, Borghini says work is already underway to integrate both Shift2Rail and Europe Rail’s research with other EU research programmes, notably relating to 5G, hydrogen and urban mobility. He also hopes that Europe’s Rail can piggyback onto national research programmes to run system demonstrators.

Creativity is certainly required if rail has any hope of meeting the ambitious targets set out by the EC in its Sustainable and Smart Mobility strategy and detailed by transport commissioner, Ms Adina Valean. Borghini says the Fourth Railway Package provides the legal framework for this transition and Europe’s Rail must now supply the technology and innovation to make this shift possible.

He is correct to emphasise that the quick delivery of market-ready solutions from Europe’s Rail is essential. While Borghini says he believes rail now has an innovation process comparable in speed with other sectors, this will only be true if Europe’s Rail delivers in the tight timeframe that he is talking about. If so, the sector is on the brink of some exciting technological leaps forward.