To mark IRJ’s 60th anniversary, David Briginshaw takes a look behind the scenes to chart the major changes in the way the magazine is produced and the development of IRJ’s website and railway data service, IRJ Pro. 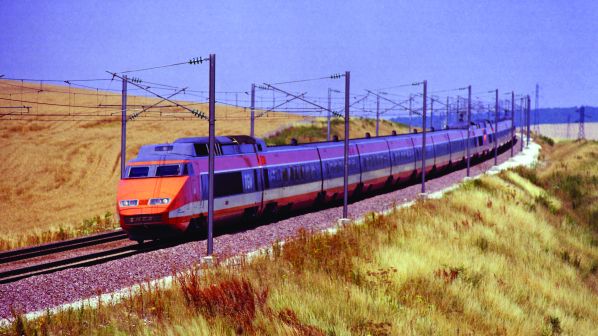 The launch of the Paris - Sud-Est line in France in 1981 marked the introduction of high-speed rail travel in Europe. Photo: ikimedia/Joost J Bakker

TWO farsighted and well-travelled Americans - the late Robert (Bob) Lewis and Luther Miller, who edited Railway Age - first came up with the idea to publish a magazine for the global railway industry. They were both strong believers in a future for rail transport at a time when rail was rapidly losing ground to road and air.

A pilot issue of IRJ was produced in 1960 and was well received by delegates attending three congresses. This gave our publisher, Simmons-Boardman Publishing Corporation in New York, the confidence to start monthly publication in January 1961.

The magazine was initially edited in Netherlands, before moving to Britain where it has been produced ever since.

IRJ has only had three long-term editors: John (Jack) Levitt from the early years until his sudden death in December 1981, followed by Mike Knutton until I took over in 2001. I edited IRJ until last year when I handed over the reins to Kevin Smith, who has been with IRJ for 11 years.

IRJ’s mission was and remains to enable the railway community to exchange ideas, share experiences, and solve problems for the betterment of rail transport, while reporting on current events and trends.

IRJ’s editorial team has always been supported by correspondents around the world who act as our eyes and ears on the ground. This is still the case today despite the rise of the internet.

IRJ’s mission was and remains to enable the railway community to exchange ideas, share experiences, and solve problems.

The way we gather news has changed radically. Initially, news arrived by mail or the occasional telegram, supplemented by trips abroad to interview senior players in the industry or attend events. The ability to telephone abroad without the need to book a call via the operator combined with the arrival of a telex machine were the first signs of progress in telecommunications. A tape with punched holes was produced in order to send telexes quickly, and it was possible to telex live which was usually reserved for booking hotel rooms or arranging meetings.

IRJ journalists never left the office for a trip abroad without a sheaf of telexes confirming hotel reservations and appointments. Not that this was fool proof. A booking for a hotel in Copenhagen turned out to be a Chinese restaurant on one trip, while I had to spend the night on a camp bed in the manager’s office of a hotel in Ankara on another occasion because the hotel receptionist denied all knowledge of the booking.

IRJ has always been held in high regard and I have often been delighted by the generosity shown to us by railways during a visit to a particular country. Apart from taking the time to conduct face-to-face interviews, railway managers have often gone out of their way to show us the working railway, including visits to signalling control centres, workshops, stations and cab rides ranging from the first scheduled TGV service in France to an inspection trolley in Zimbabwe. I have also visited many construction sites including tunnels and bridges. I remember stepping across voids on the lower railway deck of the Tagus suspension bridge in Lisbon, or being clad in white overalls for a visit to the new Eole RER line in Paris.

The way IRJ is produced has changed radically. It used to be a laborious process involving many stages. Copy written on a typewriter would then be retyped on a photo-type-setting machine to produce galleys which would be cut up and pasted onto large sheets of paper, together with bromides of scanned photos and transparencies. This would then be reproduced at a repro house and sent back for approval. Every step was an opportunity for errors. In the early days, colour was usually limited to one colour in a section of the magazine, while full colour required long-term planning and the use of a specialist company. Finally a set of films would be shipped to the printer.

Modern desk-top publishing has cut the production time dramatically, reduced the opportunity for errors and allowed the magazine to be far more topical. Of course, our digital edition now means readers can access the magazine as soon as it is published.

The internet has also transformed the way we gather and disseminate news - the only limitation is our ability to interpret the news as it arrives and present in a way that is easy to understand by readers around the world.

We also benefit from the fact that English has become a world language, which was not the case in 1982 when I joined IRJ.

IRJ has always had to adapt to changes in the market, such as the huge contraction in the number of manufacturers, which has impacted advertising and revenue. The launch of IRJ Pro, our subscription database business, has allowed us to expand the business. Coronavirus has stopped all travel for the time being forcing us, like everyone else, to use programs like Zoom.

IRJ has always been fortunate to have a loyal readership, and this has given us the confidence to start charging for access to the news, features and opinion pieces on our website. All businesses have to adapt to survive, and IRJ will continue to do so with your continued support.