Chinese entry into European locomotive business is no surprise

THE Chinese market entry into Europe by purchasing their own production facility from Vossloh in Kiel, Germany, is not a surprise, but - measured by the expectations of both the Europeans and the Chinese - rather overdue. 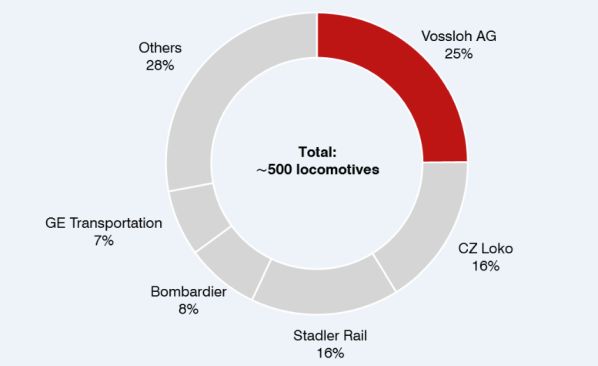 CRRC, the largest rolling stock manufacturer in the world, has been targeting Europe, the world’s most lucrative and competitive market region, for a long time. Now the market entry has been achieved by purchasing Vossloh’s locomotive plant in Kiel, which accounts for 25% of the European diesel locomotive market.

I congratulate CRRC and its ambitious subsidiary CRRC Zhuzhou Electric Locomotive on this strategically important deal. At the same time, I see great challenges ahead for the buyer of the plant, because in the past no owner has succeeded in sustainably posting a profit.

The Kiel factory opened in January 2018 following an investment of €30m and replaced a 100-year old facility which Vossloh had acquired. The 18,000m² factory features all production under one roof. Cranes are positioned to shift components to tracks which run between different manufacturing zones. This includes sound blasting, the first step prior to painting which takes place in a purpose-built facility. Bogies are also manufactured on site.

Vossloh invested €10m in new machinery, including a laser system which is positioned above the work sites and can pinpoint the precise location of individual components, accelerating the work process. Dynamic testing also takes place on site, including for the bogies and auxiliary systems, while the facility has storage for five locomotives and is connected to the main line via an 800m-long track.

According to Vossloh’s 2019 half-year results, while the factory achieved a “positive value” of €2m in 2018, a loss of €25m was incurred in the first half of 2019. Vossloh attributes this to an impairment carried out the in the first quarter “in light of current purchase price expectations.” Vossloh also reported a reduction in the number of locomotives delivered and “persistently-high expenses in production and production-adjacent areas.”

One reason for this lack of profitability is the Kiel-based company’s product range: three and four-axle diesel shunting locomotives for marshalling yards, industrial applications and regional freight services are niche products.

At the same time, the pressure on the railway industry to find alternatives to diesel for shunting locomotives is increasing, while competition is strong.

Vossloh acknowledged the difficulties it had faced in a statement on August 28. “Vossloh Locomotives today serves a narrowly-defined niche market in both technological and geographic terms and had considerably burdened both the profit and net financial debt of the Group in the past few years,” the company said. “There were no synergies with the core business of Vossloh.”

Despite the imminent sale of the plant, Vossloh Locomotives continues to work on new projects. At the Transport Logistic exhibition in Munich in June the company showed its DM20 concept for a twin-cab dual-mode locomotive with an output of 2.2MW in electric mode and 1MW in diesel. Vossloh said the DM20 is “at an early stage of development.”

The plant has to reinvent itself in order to expand and find its place in the future landscape of rail vehicle manufacturers. To achieve this, the financially and technologically strong parent company CRRC will have to play an important role.

“With CRRC, a strong partner has now been found for Vossloh Locomotives, which will allow for the business to future-proof itself and for the harnessing of synergies,” Mr Andreas Busemann, Vossloh’s CEO, said. “For us, it was important to put Vossloh Locomotives in a safe pair of hands. We were impressed with the strategic concept of CRRC.”

For Vossloh, the sale marks the completion of its strategy to exit the locomotive and rolling stock market and focus on railway infrastructure. It earlier sold its Vossloh Kiepe electrical division to Knorr-Bremse, and the former Alstom mainline locomotive and LRV plant in Valencia, Spain, to Stadler. “The sale will give us stability and end the perennial outflow of cash, which is urgently needed for the core business,” Busemann said.