Climate change: we’re all in this together

Kevin Smith argues that supporting rail projects in the developing world is just as important as those in the west to reduce emissions from transport. 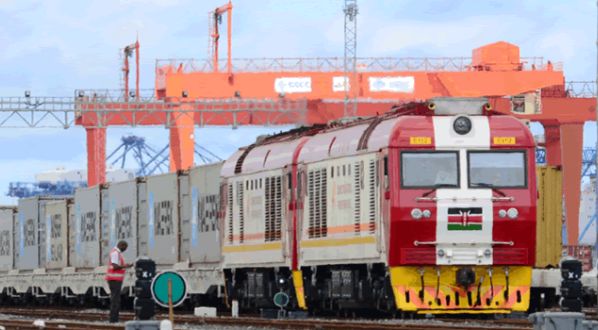 Kenya is having problems in convincing road hauliers to use its new standard-gauge railway line.

REDUCING emissions from transport is one of the biggest challenges in the quest to combat climate change. With a 24% share, transport is the second largest single source of emissions after energy. It is also the only sector where the overall share of emissions is going up.

In Europe, the European Union’s (EU) Green Deal is the guiding force for current policy and rail is seen as part of the solution to achieve carbon neutrality by 2050. The National Recovery and Resilience Plans are allocating significant resources to rail while banks such as the European Investment Bank (EIB) and ING are keen to back rail projects as they build sustainable investment portfolios.

Elsewhere, the Biden administration’s ambitious infrastructure bill is gaining bi-partisan support and includes significant efforts to electrify transport. This is an encouraging development for the world’s second largest emitter. China, the world’s largest, has pledged to become carbon neutral by 2060, which research has shown is in line with the Paris Agreement to reduce emissions to 1.5˚C, although it will require a dramatic reduction in fossil fuel consumption.

There is also pressure on world leaders to come up with more ambitious national climate plans to achieve the Paris Agreement objectives during COP26 in Glasgow in November. It is certainly in their interest to do so: research from the New Climate Economy estimates that bold climate action could deliver at least $US 26 trillion in global economic benefits by 2030.

Any agreement is likely to increase pressure on the developing world to do its part. This month we include an in-depth report on efforts in Africa to boost development of rail, which many of the continent’s legislators hope will reduce transport emissions. With the fastest urbanisation rate in the world - 960 million more people are expected to live in African cities by 2050 than today - sustainable infrastructure is desperately needed to enable burgeoning economies to grow, while limiting the impact on the environment.

Along with various national plans to revitalise and build new lines, among the most eye-catching programmes is the African Integrated High-Speed Railway Network (AIHSRN) to connect cities across the continent. There is also growing emphasis on urban transport development to tackle chronic congestion in many cities.

To deliver these projects and their projected benefits, lessons must be learned from recent experiences. With the support of Chinese finance and contractors, many sub-Saharan countries have been developing new standard-gauge railway lines to supplement or replace narrow gauge colonial lines. However, some of these schemes are facing difficulties.

For example, in Kenya, the government has faced a legal battle with China Bridges and Railway Corporation (CBRC), the contractor for the 729km Mombasa - Nairobi - Naivasha line, over the legality of the contract. In Nigeria, the government has been forced to fund part of the cost of the Kano - Kaduna standard-gauge line after a $US 5.3bn loan from Export-Import Bank of China failed to materialise.

Maximising commercial opportunities is essential for these rail projects to succeed. Unfortunately this has not always been the case.

Indeed, securing adequate finance is the biggest challenge for these projects. China’s willingness to support African projects is in line with its Belt and Road Strategy, and the terms of these agreements are often too good to turn down, as Kenya found. However, there is concern of China’s wider geopolitical ambitions, so much so that the G7 group of the world’s leading democratic economies has pledged to offer an alternative.

While currently short on detail, Build Back Better World (B3W) is aiming to narrow the current $US 40 trillion infrastructure gap, and rail development in Africa is one area that could benefit. The EU has also put significant sums into Africa through Official Development Assistance (ODA), including €620m for rail in 2018-19. And with the EIB striving to become a “development bank for Europe” this support is likely to increase.

Making sure this money is used properly is a major issue. The EIB’s vice-president, Mr Kris Peeters, told me that the bank’s biggest concern when working in the developing world is political stability. He says the bank’s experts do significant due diligence before committing to any project to make sure it is bankable. He says this work includes providing technical assistance.

Maximising commercial opportunities is essential for these rail projects to succeed. Unfortunately this has not always been the case. The Mombasa - Nairobi - Naivasha line has been operating at a significant loss since it opened, prompting Kenya Railway Corporation (KRC) to cease its arrangement with Afristar, the Chinese-backed operator. KRC’s decision to require shippers to use the railway over road has also backfired and it is now desperately searching for a way to make good on its investment.

One way might be to extend the line across the border into Uganda, offering a direct standard-gauge link to the port at Mombasa for the landlocked country, the original intention for the project. Indeed, aligning thinking and strategies between different countries is essential to achieving anything close to the AIHSRN.

While Ms Mesela Nhalpo, CEO of the African Rail Industry Association (ARIA), is right to insist that Africa should dictate its own standards, governments and railways must be open to receiving the best advice available. Unfortunately, too many of the current projects are Chinese patches on an African quilt.

Hopefully interest from other rich countries in financing green infrastructure in Africa will help more to get it right. This is especially important in countries such as Rwanda and Burundi that do not have a railway network, but are looking to rail to support efforts to reduce transport emissions. After all, in the fight against climate change, we are all in it together.