Climate emergency must stimulate faster delivery of innovation in 2020s

ARE railways entering their third major transformation? Following electrification and the introduction of high-speed, the climate emergency is promising to intensify the so-called railway renaissance during the 2020s, establishing rail as the backbone of mobility in a green and clean society. 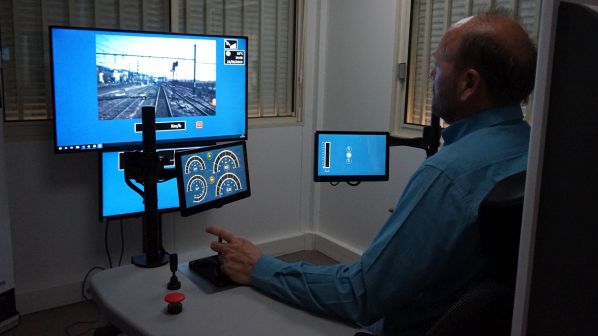 The TC-Rail project successfully demonstrated a remote driver’s desk for ATO in May 2019.

Embracing these green credentials to deliver an improved service was an underlying topic of discussion at the 12th World Congress on Railway Research (WCRR) in Tokyo at the end of October.

“Greening the planet should not stop people from travelling,” Izard said. “More green mobility is a challenge for cities and territories, but it is a major opportunity for the railway… the challenge for us now is to make the railway less expensive, more efficient, and green. This is how we will win.”

“Greening the planet should not stop people from travelling.”

The theme of the congress, ‘Railway research to enhance the customer experience,’ reflects a fundamental understanding that to prevail in a decarbonising world rail must improve what it already has - whether this is boosting capacity to improve utilisation of existing infrastructure; enhancing the passenger experience both onboard trains by improving connectivity and the general travel environment as well as the end-to-end journey through Mobility as a Service (MaaS); reducing the cost of infrastructure and asset maintenance; improving asset utilisation; eliminating diesel traction; reducing energy use and emissions; or harnessing lightweight materials. The list is extensive.

Izard said SNCF’s research agenda is driven by three strategic areas: competitiveness, digitalisation, and decarbonisation. But rather than invent new concepts that might deliver these improvements, railways like SNCF are looking at how they might harness technologies taking hold in other sectors.

For example, Izard said SNCF is actively looking at how automation, robotics, Artificial Intelligence (AI), the Internet of Things (IoT), digitalisation, block chain and advanced telecoms can help the railway. He also cited the potential of quantum computing to help SNCF to introduce predictive timetabling in the future.

While not front and centre at WCRR, blue sky thinking is not unwelcome, and is certainly taking place at institutes around the world.

As we reveal in this issue, China is exploring ultra high-speed maglev systems. Likewise, with JR Central pushing ahead with the development of the Chuo maglev between Tokyo and Osaka, Japanese speakers were keen to present maglev as the next major leap forward in rail transport comparable with the introduction of the Shinkansen in 1964. An array of maglev presentations at the conference reinforced the mode’s importance in current railway research. Likewise, Japan’s Railway Technical Research Institute (RTRI) is emphasising the development of superconducting technology, including maglev.

Siemens was one of the few contributors at WCRR to present a vision of what a future rail system might look like. Vice-president for innovation management, Mr Jürgen Schlaht’s, presentation speculated on the role of autonomous rail vehicles of different types, which communicate with one another and make better use of existing infrastructure to offer a viable alternative to the autonomous car and improved integration with other modes.

While visionary, the fundamentals of the railway in Schlacht’s presentation - steel wheel on steel rail - are the same. Many of the issues that have challenged railway researchers for decades are therefore likely to persist. Ms Lisa Stabler, president of Transportation Technology Center Inc. (TTCI), brought this point home when asked to challenge the audience of researchers to present solutions to a specific challenge by the next WCRR in Birmingham, Britain, in 2022.

“My challenge is to look at the 1mm band to better understand the properties and come up with innovative designs using new materials so we can avoid having issues develop in the wheel-rail interface,” she said.

“The industry must show that the unprecedented investment in research through Shift2Rail is producing results.”

Libor Lochman, executive director of the Community of European Railway and Infrastructure Companies

Shift2Rail, in Europe at least, is touted as the means to bridge the gap between the existing and the future rail system. The initiative was founded with the idea of rethinking the fundamentals of the railway and challenging accepted thinking. Railways and infrastructure managers are working alongside industrial partners to identify and solve specific technical challenges. In the inaugural Catalogue of Solutions, officially launched at WCRR, there are 54 examples of new innovations which have the potential to improve performance.

However, as Mr Libor Lochman, executive director of the Community of European Railway and Infrastructure Companies, told me, the challenge is to convert these expected deliverables into usable solutions. The industry must show that the unprecedented investment in research through Shift2Rail is producing results.

Speed of innovation remains the railway’s Achille’s heel and Lochman is right when he says that the industry has been very good at delivering reports and demonstrators but poor at converting these into usable solutions. Shift2Rail executive director, Mr Carlo Borghini, has consistently emphasised that Shift2Rail will only be a success if its innovations are adopted and deployed.

For SNCF’s technological renewal director, Ms Corinne Talotte, this means the end of the idea of developing a proof of concept. “By testing new breakthroughs in technology, we can define and develop investments that are important for the future deployment of innovation rather than just a proof of concept,” she said. “We have to think about future deployment from the beginning.”

Talotte was speaking during a discussion at the conclusion of the conference which covered many of the challenges holding back swifter deployment of new innovations.

Among the examples of SNCF following this approach is the TC-Rail ATO project, which is part of its autonomous trains programme. Ms Émilie Masson, project manager for the autonomous train programme at Railenium, told the conference that SNCF successfully completed trials of a new prototype remote driver’s desk in May 2019. Likewise, German Rail (DB) is embracing deployment of new innovations through its TecEx initiative, covering 18 core technologies and 10 base technology fields, and which Mr Rolf Härdi, DB’s chief technology and innovation officer, said DB is going to update this year.

DB and SNCF are both members of Shift2Rail. However, the railways are not solely relying on the initiative to drive their research. As we have reported often on the pages of IRJ, they are also working closely with universities, industrial partners and internally to encourage innovation throughout the entire company.

Work with start-ups through their own incubators is a key element of this approach as the railways seek to access the agility of these companies’ innovation processes to solve some of their most pressing challenges. Härdi highlighted Holoplot’s targeted audio speaker system, which is undergoing trials at Frankfurt station, as one of DB’s start-up success stories.

One of the lessons from start-ups is their willingness to accept, even relish, failure and quickly move on. DB and SNCF executives regularly cite this understanding as did Swiss Federal Railways’ (SBB) head of technology, Mr Arne Benox.

SBB is another railway embracing the challenge through its SBB 2020 strategy, one of the highlights of which is the plan to increase overall network capacity by 30% without additional investments in infrastructure. However, while cultural change at the top of these organisations is the driving force for change, it is left to the technical managers and engineers to come up with the solutions. For Benox, this presents major challenges.

“We have to change our organisations so as not to put a lot of stress on a small number of people.”

Network Rail’s chief rail technology officer, Mr Andy Doherty agreed, stating that the make-up of the current workforce must shift from structural and mechanical engineers to specialists in software if the sector is to succeed. “We have to change our organisations so as not to put a lot of stress on a small number of people,” Doherty says. “To have the ability to take on the innovation we must be innovative ourselves. Everything about the culture has to change.”

It is no surprise that railways like SNCF and DB are among the leaders of this research innovation charge. Around 2016 their respective management teams realised that major structural changes were needed to better place the railways to embrace innovation through digitalisation. DB for example restructured and altered the make-up of its board as it pushed ahead with its DB 2020+ strategy, shedding executives which did not buy into the vision.

With the climate emergency focusing attention, and growing use of the railway as a means to cut transport emissions, it is imperative that management boards at other railways, operators and infrastructure managers follow suit and embrace radical and innovative thinking. This also means investing more in research and innovation. According to RTRI president, Dr Norimichi Kumagai, rail companies invest an average of 1-2% of their budget in research and development. This compares with 6-7% in automotive and IT.

As Professor Anson Jack, international director of the Birmingham Centre for Railway Research, told WCRR, railways have traditionally been good at responding to a crisis. It is critical that they do so again.