WE cannot go back to the past. That is not just my view but an opinion that echoes around the rail industry. 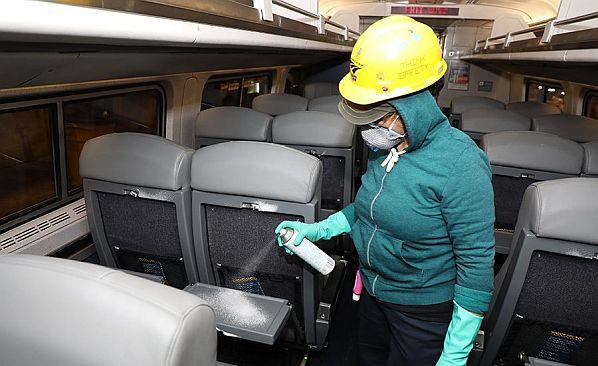 The coronavirus pandemic presents a unique opportunity to reshape transport.

The rail sector has been through extremely difficult times during the past few months, and the coronavirus pandemic is far from over. Rail passenger traffic collapsed during the lockdown, and even as restrictions begin to ease in several countries, social distancing rules are limiting capacity for operators while some governments are advising the public to avoid rail travel altogether.

It is a different story for freight traffic. Here the railways have shown that they have a valuable role to play as part of a cost-effective supply chain. Inevitably, the massive economic impact of the crisis is reducing traffic. This will change in time and the world economy will adapt and recover. Public transport, by road, rail and air, is an essential part of the economic infrastructure and solutions are already being found to ameliorate risks, for example, by encouraging passengers to wear face masks.

But we are not going back to where we were. 2020 will be both a challenge and an opportunity for the railways.

The Rail Working Group, which represents an extraordinary cross-section of the global rail community, has just asked its members and supporters what they expect for the rail industry looking forward. The responses are fascinating.

Some 77% of respondents think that the railways’ role in the global supply chain will be more significant in the future, and no one believes it will be less essential. Fully 84% believe that the continued development of Eurasian rail freight corridors is now an imperative, and almost 98% of respondents think that cross-border interoperability of freight and passenger rail services will become more important. About 46.5% believe that both freight and passenger transport will grow in the next two years compared with other modes of transport post-pandemic, compared with just over 36% who think that only rail freight will increase and 7% who believe that only passenger rail traffic will grow. More than three quarters expect passengers to increasingly choose rail over flying once the dust settles.

But against this hopeful backdrop the problem is clearly financial. About 45% of our respondents believe that the railways will be in a worse financial position post crisis, while 30% think that nothing will change. Around 50% of respondents believe there will be less government financial support for the railways, with 30% expecting no real change. Interestingly, more than 88% say that governments should liberalise the market to allow public and private operators to compete, and 95% think that with strong pressure on government finances, there will be a greater need for private financing of rolling stock.

How should we analyse these responses? The crisis presents an opportunity for the rail sector to increase market share, but the expected lack of money will be a major issue. The private sector needs to play a more significant role in both operation and financing. So, it is no surprise that 86% believe that international political cooperation and coordination on rail transport, including instruments such as the Luxembourg Rail Protocol, will become more important in the future.

Is the glass half empty or half full? As an industry we look at the situation positively despite the awful impact the virus has had on millions of lives. Governments must now look strategically, and positively, at how to develop rail not just as part of a green agenda, but also as part of contingency planning for the next pandemic (or the revival of the current one). It’s not just that one freight train can haul the same quantity of freight as 50 trucks, crossing closed borders with perhaps just one driver. A move to rail allows us to retain the environmental gains from the lockdown. This means pushing ahead with open access within countries and regional networks, marking out dedicated or priority freight corridors, enabling longer freight trains, facilitating more market transparency and ensuring a competitive level playing field within the rail sector and between rail and other modes of transport, and critically, increasing investment in more rail infrastructure (including technology) and new, more efficient and environmentally-friendly rolling stock.

The danger is that governments with limited resources will miss this opportunity to reshape the transport sector, despite the fact that many of these objectives can be achieved simply by legislative or judicial action. Open access and a level playing field needs rules and consistent enforcement. Rolling stock can be financed exclusively by the private sector. The adoption by states of the Luxembourg Rail Protocol will make this cheaper and easier, while lowering the barriers to entry by supporting operating leasing, leading to a more competitive and dynamic industry. Moreover, through the provision, for the first time, of a global unique identifier for rolling stock, the Protocol facilitates real-time location and status tracking of all rolling stock and enables predictive maintenance programmes. This can be achieved at no cost to governments and negligible expense for operators and manufacturers.

Policy makers need to ensure that there is no reversion to the past, as this is a watershed moment. Major investment from government is needed, although these resources are heavily constrained. The solution is to focus state funding on areas where private investment is often either impractical or too expensive, such as railway infrastructure, and to create the conditions for the private sector to finance equipment and operators. Only then can the rail community embrace the new opportunities to radically improve our economy and our environment. It’s time for government leaders to look forward; there is no going back. IRJ