Rupa Nandy, head of UITP India, reflects on the impact of Covid-19 on Indian metros. 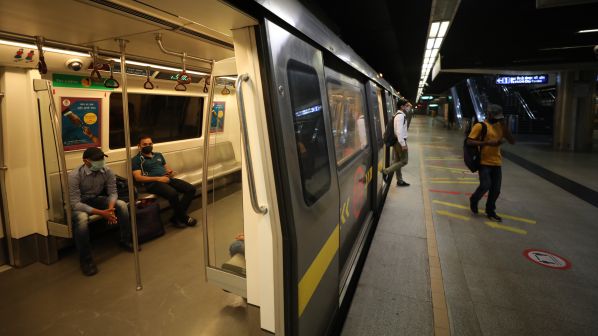 We saw a strong focus on public transport in the recent Union Budget of 2021, presented by the finance minister, Ms Nirmala Sitharaman, on February 1, which included a Rs 180bn ($US 2.48bn) scheme for buses, and substantial funding for metro networks.

For example, Rs 19.57bn of central counterpart funding will be provided to Kochi Metro while Chennai Metro will receive Rs 632.46bn, Bengaluru Metro Rs 147.88bn, and Nagpur Metro Rs 57.76bn. The budget also states that Metrolite or light rail and Metro Neo - an elevated trolleybus system - will be promoted and deployed to offer the same experience, convenience and safety as metro networks but at a much-reduced cost in Tier-2 cities (cities with a population of 50,000-99,999 people) and peripheral areas of Tier-1 cities.

Currently Kolkata is the only Indian city with a light rail system. However, the poor condition of the network and outdated technology means it is not popular with residents. The allocation of financial resources to develop this mode of transport is an admirable policy by the government. Equally, moves to develop elevated and grade separated trolleybuses is refreshing, and Nashik Metro has already been allocated Rs 20.92 to pursue a project.

The public transport sector has received a new energy boost from this year’s budget, but it is of course still struggling with the impact of Covid-19.

India went into one of the world’s most stringent lockdowns on March 25 2020. While many activities opened across the country from June 1, metros were not allowed to operate until September 8. One metro was losing Rs 80m per day by not operating, which equates to Rs 13.52bn throughout the 169-day shutdown. This has of course been tough for the sector to swallow.

Many metros in India decided to use the lockdown period to advance their construction activities. However, the mass exodus of labour from cities as people returned to their hometowns added to the woes. Fears of Covid-19, job losses and poor visibility for the return of work created this mass exodus and has resulted in delays to various projects. Metros in Delhi, Chennai, Pune, Mumbai, and Bengaluru, to name a few, faced having to manage construction activities with less than half of the planned labour resources.

Similarly, imports of rolling stock for many metros were delayed due to the pandemic while some authorities have pushed back tendering processes for upcoming projects due to the delays with current projects. It is expected that the ripple effect of Covid-19 will be felt for at least the next three years.

When metros did finally resume operation, ridership dropped by up to 90% compared with pre-pandemic traffic. In addition, operators are having to bear the additional costs of regular sanitisation of vehicles, providing PPE including masks, gloves and shields for staff and sanitiser for passengers, marking of seats, managing queues to entrances and exits in order to maintain social distancing, and additional investments such as thermometers, thermal scanners, and thermal cameras.

Nevertheless, all Indian metros have worked innovatively to bring passengers back and to actively promote public transport. Chennai Metro has recovered 38% of its pre-Covid-19 ridership and is regularly receiving requests from city dwellers to increase frequency. Hyderabad metro has introduced special offers to its passengers using the Maha Metro, as part of efforts to increase ridership. It has also organised carnivals and events such as drawing competitions, skating performances, and music programmes at stations. Kochi metro has also introduced feeder services to various stations to improve connectivity.

India currently has more than 700km of conventional metro lines in service and another 1000km of metro and regional rapid transit system lines are under construction – making for a bright future for urban rail.

As the country resumes economic activities, public transport - and especially mass rapid transport - remain the pillar of strength for sustainable mobility and is indispensable for economic revival and the growth of the country as a whole.

The upcoming fourth edition of the UITP India Urban Rail Seminar, scheduled as an online digital event between February 23 and 26, offers a promising programme with numerous technical presentations as well as a plenary session.

Once again, Delhi Metro Rail Corporation (DMRC) will host the annual seminar, which will feature a keynote speech from Mr Shanker Mishra, secretary at the Ministry of Housing and Urban Affairs, government of India. The seminar will also include contributions from key Indian dignitaries such as Dr Mangu Singh, managing director of DMRC, and Mr Pradeep Yadav, managing director of Chennai Metro Rail.

Other key national and international speakers will share their knowledge and experiences of the pandemic. In addition, the lessons from these unprecedented times will also be on the table for discussion.

The future of urban rail in India remains bright and we look forward to welcoming you to join the discussion.

Rupa Nandy is head of International Association of Public Transport (UITP) India. UITP opened its first base in India in 2007 in Bengaluru, which was followed by an office in Delhi in 2019.