The programme to develop a domestically-produced inter-city EMU for Indian Railways is in danger of losing focus as specifications are inflated, says Sudhanshu Mani.* 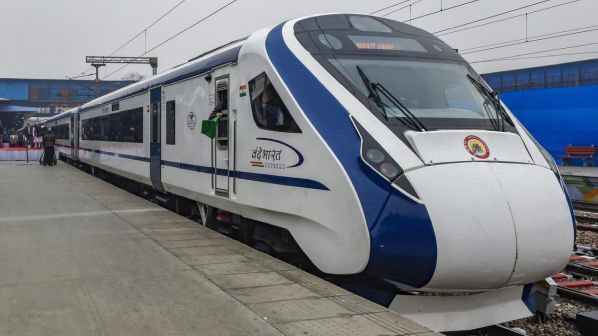 INDIAN Railways (IR) is always in the news, and the latest focus for attention is the Vande Bharat EMU project. A team of engineers from Integral Coach factory (ICF) in Chennai and its suppliers came together in 2018 to deliver what was then known as Train 18, aiming to deliver in just 18 months and at a fraction of the cost elsewhere a world-class train made in India.

The train caught the imagination of the country as a symbol of a resurgent and aspirational India. And it paved the way for a new era in the rail sector, making a real break with the past in terms of IR rolling stock production and taking a quantum leap into the future.

But its success became its downfall as a self-interested bureaucracy began to talk the project down even as the prime minister himself was unstinting in his praise for the new train. Production was halted, but the prime minister announced definitively on August 15 2021 that 75 Vande Bharat trains would be running across the country in 75 weeks’ time.

Soon there was a change of regime at the Ministry of Railways, and the mood changed dramatically as the new minister pushed for these 75 trains to be rolled out at top speed. As production began in earnest at ICF, the finance minister sprang another surprise in his budget by announcing that 400 Vande Bharat trains would be manufactured over the next three years.

Observers are now watching closely for the rollout of the third Vande Bharat train. The original target was to produce two trains by March 22 2022, but following repeated delays it is now expected to emerge on August 15. It is reported that the third train will be better than the first two, and genuine improvements in passenger comfort are certainly needed, rather than the faster acceleration and better ride comfort that were added to the specification as an after-thought, even though the original specification was already very good.

Another curious announcement is the increase in production capacity at ICF from four to six trains per month. This seems unnecessary as even if the rate of four trains per month were reached, it would be a job well done, notwithstanding the 75 trains in 75 weeks announced by the prime minister. ICF has not undertaken any rolling stock production for over three years and it is better that production is not rushed at the expense of sustained build quality.

In April this year a tender was called for a major rolling stock manufacturer to build 200 Vande Bharat sleeper trains at ICF and in Latur. The opening of the bids has been postponed twice to October, but given the magnitude of the project this is hardly surprising.

Another tender has been announced to build 100 aluminium-bodied sleeper and chair car trains featuring distributed traction, with production to be undertaken at a new facility in Sonipat. This is likely to be followed by another 100 locomotive-hauled aluminium-bodied trains.

Where all these new trains would be deployed is not certain, as the existing pool of IR Shatabdi, Rajdhani and similar services is much smaller than the new orders. What is really strange is that these trains will be designed to operate at up to 200km/h and will be tested at up to 220km/h, despite the fact that IR has no suitable infrastructure for such testing, let alone regular operation at 200km/h.

Official IR publicity says that while the earlier two Vande Bharat trains could operate at up 160km/h, the third would be capable of 180km/h while a 220km/h variant would see the light of day in 2025. Is this a classic example of an overzealous IR putting the cart before the horse? The first train was tested at 180km/h and the same applies for the third train, so what is the compulsion to find a virtue in necessity?

But 220km/h is certainly a grandiose declaration. Even the Research, Design and Standards Organisation (RDSO), which was involved in the development of Vande Bharat and undertook statutory testing, has announced that 100 trains would soon be cruising India’s railways at a speed of 200km/h. One has to ask where these magic tracks are.

And now come media reports that India is looking to export the Vande Bharat EMU to it neighbours in south Asia and even as far afield as Latin America. Setting aside the lack of electrification in many of these countries, I can only add that any potential purchaser would naturally ask how many of these trains were operating in India? When they were informed that there were only two, they would say “first go and run 20 trains successfully for a year in your own country before you even dream of exporting them.”

Finally, there is the issue of maintenance and staff training. IR seems to have finalised its plans for setting up maintenance depots at 15 stations on the 28 routes where the Vande Bharat would be deployed on Shatabdi services and other inter-city trains. We need a robust plan to run the new trains in large numbers with proper maintenance facilities and adequate staff training before we push them on unprepared local railway management, running the risk of frequent cancellations and disruption due to maintenance downtime and reduced reliability.

Once again, IR must tread with caution. Deployment of the first 30 trains should be concentrated on Delhi and two or three other depots. Only after new procedures for operation and maintenance have bedded in should IR think of introducing the Vande Bharat to more routes with additional maintenance depots.

Vande Bharat is a good design and will surely only improve with time. So why try to gild the lily and embellish something that is already beautiful? I hope that the focus shifts towards the early delivery of the much-awaited third train and then series production.

* Sudhanshu Mani is an independent railway consultant. In his 38-year career with Indian Railways, he was general manager of the Integral Coach Factory in Chennai and led the Vande Bharat Express project to develop India’s first domestically-produced semi high-speed train, from concept to delivery. Mani also served as railway advisor to the Indian embassy in Berlin, Germany, for three years.