First and last-mile connectivity has always been the Achilles’ heel of any railway operation. While trains are able to deliver large volumes of people quickly and effectively from point to point, passengers’ homes or offices are often some distance from the station, and when it comes down to a straightforward choice, it is hard the match the convenience and flexibility of simply jumping in your car and turning the key. 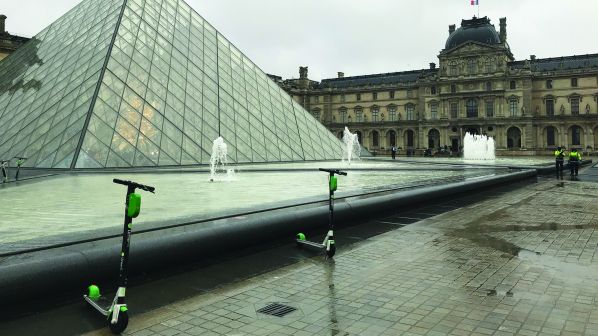 Lime's shared scooters, a new form of urban mobility, are becoming a familiar sight in cities around the world.

However, there are signs that the public’s acceptance of personal mobility is beginning to shift.

The financial challenges of owning a car - rising petrol prices and insurance costs - as well as the problem of securing a parking space and urban congestion are increasingly putting people off. Environmental concerns are also encouraging people to move away from personal transport based on the internal combustion engine and embrace green and shared mobility options.

This is reflected in a variety of trends in different countries around the world. Populations are becoming ever more urbanised making it easier for people to access public transport infrastructure. For example, 29% of Italy’s population now lives within 1km of a station and 73% are within 5km. Young people in particular are also not as star struck by the thought of owning a car as much as previous generations. In Sweden, just 10% of 18-year-olds in Stockholm have a driving licence. And in the United States, the bastion of car ownership, the number of 16-year-olds applying for driving licenses has dropped by 50% in the last decade.

“The private car is an under-utilised resource,” Mr Francisco Furtado, modeller/analyst at the International Transport Forum, told the 1st Door-to-Door Solutions Workshop hosted by the International Union of Railways (UIC) in Warsaw on November 14. “On average they are used for 50 minutes per day and by 1.2 users on each occasion. Why have we accepted this? Because it is convenient and there is a level of flexibility that we can’t run away from. But what if mobility companies are able to offer similar convenience and flexibility as the private car but use these resources in a more efficient way?”

In the past, people have been reluctant to embrace shared mobility because the level of service is perceived to be inferior to that offered by the private car. However, digitalisation is providing the means to bridge this gap.

The workshop presented a number of shared mobility concepts which are offering high-quality services, and are growing in popularity in cities around the world.

For example, Car2Go, Daimler Group’s car sharing service, now has a fleet of 14,000 vehicles in 25 cities. The service has 3.5 million users, which is increasing 25% year-on-year. A Car2Go vehicle is now hired every second.

Registered users are able to access vehicles using a smartphone app, from which they pay for the service which is charged depending on the type of vehicle and the distance travelled. Mr Gianni Martino, managing director and country manager Europe South at Car2Go, told the workshop that the service is designed for individuals but also corporate clients, many of which he says have replaced their own car fleets in favour of the concept.

Public bike-sharing operator NextBike along with US electric scooter-sharing pioneer Lime, which has expanded significantly in Europe in recent months, uses the same app-based model for service access and payment. Lime recently became France’s most downloaded travel app following its launch in Paris, Lyon and Bordeaux.

Other tech companies are working on integrating these services together. Urbi is a single app which integrates 53 providers and seven modes of transport, offering users the best possible connection options.

This trend for sharing and integration is not lost on railways.

For example, Italian State Railways (FS) presented its partnership with MyTaxi, a consolidated taxi booking service, which is supported in over 500 European cities, with Trenitalia passengers able to get discounts on their connecting journey. The operator is also working with Lastminute.com to offer discounts on hotels, and with car sharing company Enjoy. This partnership commenced in 2013 and the company’s vehicles are the same colour as the operator’s Frecciarossa high-speed trains and feature the high-speed logo on the side.

In Switzerland, Swiss Federal Railways (SBB) is launching SBB Green Class. This monthly subscription service will offer users a bundle of transport options, including a rail pass, bike and car-sharing options, and access to a hybrid vehicle. With 4.5 million cars on Switzerland’s roads, an increase of 1 million in the last 10 years, SBB considers car sharing as the means to cut overall car ownership and use, thereby reducing greenhouse gas emissions.

Norwegian State Railways (NSB) is on the verge of launching a car sharing service in Oslo. Branching out into new areas is important to the operator, the functions of which has been scaled back substantially under the reforms to the Norwegian rail sector.

Yet there is one caveat to the emergence of these new modes of transport: the importance of political oversight and regulation, which so far has failed to keep up with many of these new business models and means of offering transport.

Shared scooters are a clean and fun way to help people to get from A to B in an urban environment. But there is also concern over increasing urban litter and the relative chaos they have caused with limited regulation of their application. While users are informed that they must wear a helmet and not ride on the pavement, a recent trip to Paris revealed that the exact opposite is happening.

Then there are transport network companies (TNCs). Uber and Lyft have not replaced the traditional taxi service around the world, they have added more cars to city streets, helping to extenuate the congestion problem. In the United States, for example, these ride-hailing services are estimated to have tripled for-hire vehicle mileage within the space of just a few years.

Studying the issue in a report released in July, US transport analyst Mr Bruce Schaller warns that if cities don’t take steps to curb car traffic and prioritise spatially-efficient modes like transit and cycling, Uber and Lyft will continue to exacerbate urban traffic congestion and weaken surface transit systems.

Mobility as a Service (MaaS) provides the means for urban transport administrations to channel their residents’ movements by offering clear integrated multi-modal transport options for a complete journey, from A to B.

If delivered correctly, this promises to provide sustainable transport options which improve the urban environment. Railways must be at the centre of this. However, it is important that they and the new mobility players share data and trust each other so they all have their role in a single system. There is a place for TNCs and shared cars. However, the last thing cities need is for their residents to swap their private cars for chauffeur-driven transport. The early adopters of MaaS get this. It is important as the concept develops, and regulation is drawn up, that other urban areas follow their lead.