Policymakers must see rail as a solution to the climate crisis

IRJ editor-in-chief, Kevin Smith, reflects on the Connecting Europe Express and looks ahead to COP26 where he argues it is essential that the rail industry's voice is heard. 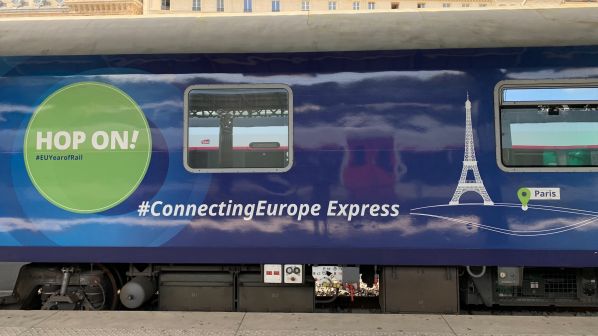 The CEE will be remembered as the flagship event during the European Year of Rail.

The train was greeted by delegations of politicians and dignitaries at every stop, all of whom spoke enthusiastically of the benefits of rail transport with many announcing new investments and initiatives to support further growth and development.

The CEE will be remembered as the flagship event during the European Year of Rail. My colleague David Burroughs rode the train on several of its later legs and his excellent report (p16) highlights how more than 40 organisations came together to make the journey possible.

With coronavirus restrictions continuing throughout much of 2021, there is a sense of frustration of what might have been for the European Year of Rail. Unfortunately, many of the planned events did not happen or if they did, they did so online, limiting the scope of what was possible. Calls from industry bodies midway through the year to extend the Year of Rail into 2022 were disappointingly denied.

Yet as many of the discussions at events that did take place show, there is a feeling that the European rail sector is at a turning point. Another special train will travel from Amsterdam to Glasgow this month to highlight the role that sustainable transport should play in a carbon neutral future. Rail to the COP will carry groups of young people desperate to see a change in climate policy from national governments. They envision a future where travel is a force for good and does no harm to the travellers themselves and the ecosystems and the communities that welcome them.

Unfortunately, discussions are focusing too much on new technological solutions like electric cars and hydrogen planes.

Change is certainly required. Five years since the Paris Agreement, the annual World Energy Outlook report published by the International Energy Agency (IEA) on October 13 estimates that current government policies will only result in a 40% reduction in emissions by 2050, depressingly short of the net-zero target. The IEA says a $US 4 trillion investment is needed to make up the shortfall.

Transport is the second largest overall emitter and the only segment where emissions are going up. Rightfully it is receiving a lot of attention in the run-up to COP26 where IEA is urging leaders to send an unmistakable signal with concrete policy plans. Unfortunately, discussions are focusing too much on new technological solutions like electric cars and hydrogen planes that cannot yet make much of a difference to overall emissions. Even a quick browse of the transport section of the COP website reveals that the conversation is dominated by efforts to decarbonise road, aviation and shipping rather than shifting traffic to rail, already a green transport mode. As Mr Philip Turner, head of sustainability at the International Association of Public Transport (UITP), told me (p42), there is too much emphasis on silver bullets and not solutions that work.

It is critically important that rail’s voice is heard at the event. UITP and the International Union of Railways (UIC) will lead the charge and the organisations are optimistic that they can get their message through. Then the hard work will really start.

As Burroughs’ report reveals, the CEE highlighted many of the shortcomings of cross-border rail travel in Europe, which accounts for a measly 7% of all European passenger rail traffic and is a major target for growth. Differences in track gauge are obvious. However, stories of CEE passengers having to move to the next coach as the one in which they were sitting was not approved for the section of line on which they were travelling, demonstrate some of the frankly ridiculous regulatory hoops that the sector must overcome.

The European Commission (EC) continues to advocate for the completion of the Single Europe Rail Area and supports an upsurge in cross-border rail traffic to compete more effectively with short-haul air. The EC is set to adopt an action plan on long-distance and cross-border passenger rail services in December, which will include insights from a study prepared by the Steer consultancy. Pending approval of the plan, a call for proposals to run 15 demonstrator cross-border routes is expected to take place in 2022.

It is critically important that rail’s voice is heard.

Introducing more cross-border connections is one thing, but to be successful they must be attractive to passengers by offering ease of access and a high level of service at an affordable price. The cost of using passenger rail in some countries is currently prohibitive for many people. Taking a train because it is green simply does not wash with the majority if it is 50% more expensive than the equivalent journey by road or air. These high costs are not always the fault of operators. Rail does not benefit from the same tax breaks as other modes, meaning costs are passed to passengers. If policymakers are serious about reducing transport emissions and shifting traffic to rail, they need to enact policies that finally level the playing field between modes. This should be a key message for those gathering at COP.

Rail can also do more to improve its utilisation rate, as Michael Peter, CEO of Siemens Mobility argues (p22). Rail travel has traditionally been defined by two peaks with a major drop off in use during the day. However, new travel patterns emerging after Covid are spreading out demand. Interestingly, more people are looking to use rail at weekends and railways should respond to this by rethinking maintenance strategies that close lines on Saturdays and Sundays and offer incentives for using the train. Converting diesel locomotives that regularly run under wires to multi-system units is another suggestion offered by Peter.

Crucially, many of these changes are relatively easy and offer immediate benefits. Scientists say there is just 10 years to slow climate change, it is now time to be decisive. The clock is ticking.