Kevin Smith assesses the railway sector's response to the war in Ukraine and the damage the conflict has inflicted on Russia's standing in the global railway community. 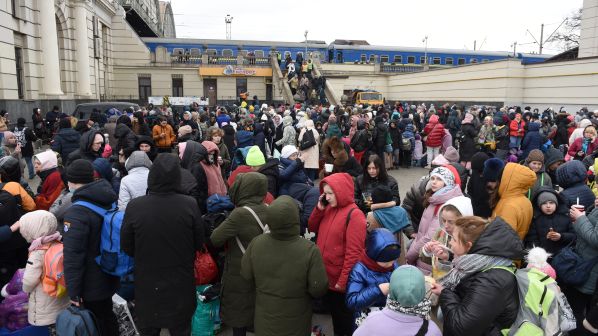 Refuges at Lviv station waiting for the train to Poland. Photo: Shutterstock

RUSSIA’s invasion of Ukraine and the subsequent humanitarian emergency has shocked the world. More than 3.6 million refugees have fled the country since the invasion, the majority of them leaving by train, in what is Europe’s worst refugee crisis since the Second World War.

As our extensive report shows, Europe’s rail operators have stepped up to provide the extra capacity needed to accommodate these passengers on cross-border trains out of Ukraine. Refugees have also been granted free travel by rail operators across the continent as they seek a safe haven away from their worn-torn homes.

Rail has also played a key role in delivering aid and supplies to Ukraine. While the road network into Ukraine is heavily congested and largely blocked, freight trains are continuing to operate in and out. The railway is a proving a lifeline for Ukraine.

Ukrainian Railways (UZ) has exhibited remarkable resilience and resistance since the war broke out. The railway has provided a regular update of its activities on its website as it attempts to keep the railway running for those who remain in Ukraine and for those who are looking to leave. This is in spite of its infrastructure and assets coming under consistent attack from Russian forces.

This is quite a contrast to the typical railway executive that we regularly feature in IRJ, reflecting the unprecedented nature of this situation.

UZ is Ukraine’s largest employer and numerous staff have worked around the clock to keep the trains running since the conflict began. This includes the railway’s chairman, who has emerged as a hero of the resistance.

Mr Oleksandr Kamyszyn, a 37-year-old who only took on the job in October 2021, was expected to oversee reforms of the railway - he signed a contract with Alstom for 130 locomotives in the days before the conflict. That contract has since been suspended as Kamyszyn has been transformed into a wartime director of operations. A BBC reporter shadowed his movements during the course of a day three weeks into the conflict. Pictured with a team of bodyguards, as a prized target of the Russian military, Kamyshin selects his movements carefully.

This is quite a contrast to the typical railway executive that we regularly feature in IRJ, reflecting the unprecedented nature of this situation. The world is watching tentatively to see what happens next. As our report concludes, the only certainty at present is uncertainty.

There are already negative ramifications for the global railway sector from the war. Trans-Eurasian rail freight has been an industry success story of recent years. New routes have been established between Chinese cities and countries in Europe at regular intervals leading to steady growth. Indeed, China National Railway reported on February 26 that 15,000 trains carrying 1.46 million TEU had operated between China and Europe in 2021, a respective year-on-year increase of 22% and 29% compared with 2020.

However, these freight flows have withered away since the start of the conflict. Russia’s Trans-Siberian railway is the backbone of these operations. But with shippers not willing to take the risk of sending their goods through Russia, Russian Railways (RZD) facing sanctions, and European operators suspending operations to border stations, they are looking once again to maritime. The immediate future of these services looks bleak.

Proponents are touting the southern route as an alternative. Passing from Kazakhstan to Azerbaijan, Georgia, and Turkey to Europe, it is possible, but there are challenges. Numerous border crossings and the need to cross the Caspian Sea will slow trains down. Infrastructure capacity constraints, including through the Marmaray tunnel in Istanbul, also mean that the current level of traffic is only a fraction of what is possible via Russia. These issues can of course be solved but it will take time and a significant amount of money.

Vladimir Putin’s actions in Ukraine have also isolated Russia from the global railway community. Consistent with other industries and businesses, rail firms were quick to distance themselves from the Russian market in the days following the invasion - Alstom, Siemens and Stadler all put out strongly worded statements.

The International Union of Railways (UIC) has also suspended the membership of RZD and Belarussian Railways (BC) until further notice. RZD has been an active member of the association in the last decade or so, holding the rotating presidency for two terms from 2012 to 2016. Its staff also participate in regional activities as well as UIC research projects. Engineers from RZD and Russian research institutes have similarly consulted with their European counterparts on various projects, including mainline automation where Russia is arguably leading the way. Their immediate absence is a loss for both sides.

The Russian railway industry’s export activities have likewise been plunged into uncertainty. Sinara Transport Machines and Transmashholding have won contracts in various markets in Europe, Asia, Africa and South America, carving out a small but growing presence.

TMH International issued a statement distancing itself from its Russian parent company on March 1, stating that it is a Swiss company governed by the laws of Switzerland. Local subsidiaries in Germany, Hungary, Argentina, Egypt, and South Africa are also governed by laws of their respective countries. However, despite standing firm, TMH is facing a fight to retain its reputation given the current toxicity of any association with Russia. Relationships that have been built up over many years, offering benefits to both sides, have seemingly been destroyed overnight.

The Ukrainian crisis is a tragedy, and the needless slaughter of the Ukrainian people will have ramifications for a long time to come. The European railway sector’s response to offer support where it can has been admirable. Long may it continue in what look like difficult days ahead.