AS Covid-19 lockdowns begin to ease, a new normal is emerging for rail transport. 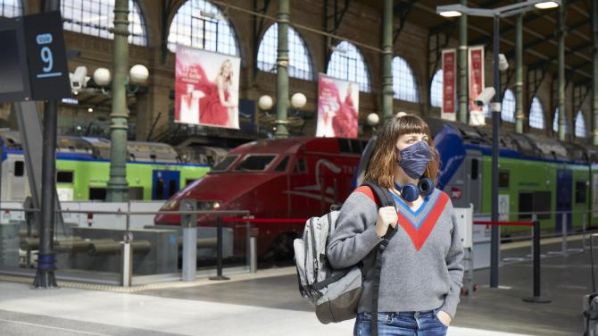 China’s employment of social distancing at stations and onboard trains, which we reported last month, is steadily becoming established practice on networks around the world. In many countries the advice remains to travel only when necessary and to wear a mask. Passengers must maintain a distance ranging from 1-2m depending on the country, and increasingly many governments and authorities are tracking movements using smartphone apps.

While essential to safeguard the population’s health, this is a potentially calamitous situation for operators. The International Association of Public Transport (UITP) projects a €40bn hit at the farebox for European public transport operators in 2020. US transit providers are similarly facing a $US 23.8bn shortfall by the end of 2021 in addition to the $US 25bn already covered by the US government’s Covid-19 relief package.

Rail market analysts at SCI Verkehr do not foresee a return to pre-Covid-19 traffic levels before 2024 in their most likely outcome scenario for the current crisis, in which more localised public lockdowns return. In the most optimistic scenario, where the virus is eradicated by the middle of next year, rapid recovery is expected by the end of 2021 following a 50% reduction in traffic in 2020. However, in the most pessimistic case, where economies are hit hard and unemployment increases by 30-40% in 2020, SCI says that rail transport performance will not reach pre-crisis levels before 2025.

In this scenario, SCI assumes that more people will change their travel behaviour in the long-term at the expense of rail. This situation will worsen the longer the crisis lasts, and it will become harder to convince those using their cars to return to trains and buses.

As the recession takes hold, there is a risk that politicians and decision makers become blind-sided by short-term trends.

While understandable given the risk, the British government’s policy to advise people to avoid public transport is not the right message for the new normal. Encouraging people to use private transport heightens congestion and extenuates air pollution. In addition, many cities are simply not geared up for a huge influx of cars.

Thankfully this negative approach appears to be the exception rather than the rule. In cities across Europe, leaders have been actively using public transport services while following the new protocols to emphasise that it is safe and inviting citizens to do the same. Trenitalia is also reassuring high-speed passengers by providing complimentary personal protective equipment (PPE) kits to maintain personal hygiene while travelling.

As the recession takes hold, there is a risk that politicians and decision makers become blind-sided by short-term trends when deciding where to direct recovery funds.

Demand for travel might be reduced now and in the immediate future. But even in SCI’s most pessimistic forecast, as in past crises, demand will return and with it the capacity constraints which restricted progress in the recent past.

For this reason, it is imperative that decision makers continue to take the long-term view and use this time wisely. Indeed, they would do well to note PKP Cargo’s approach.

Instead of making “impulsive” decisions to fire employees and respond to the here and now, as CEO, Mr Czeslaw Warsewicz, told me, the freight operator is using the Polish government’s economic relief package to buy time to reflect on and tweak its long-term strategy.

The wider sector should also use this time to adapt to the new normal so it works in its long-term interest. For example, some infrastructure managers have already taken the opportunity to increase maintenance or bring forward upgrades while there are less trains running. Perhaps others could do the same?

Of course, with a limited pot of money available, and with governments already committing billions to keep passenger operators afloat, rail, as always, will have to fight to secure the investment it needs.

A letter to the EU signed by 80 public transport company CEOs and city representatives, which was presented by the UITP, urged European institutions to include urban public transport as one of the strategic sectors in the EU’s plan for recovery from the Covid-19 pandemic.

This display of unity is encouraging. As the letter states, public transport is a key accelerator of the economy, job creation, social inclusion, health and sustainability. The signatories are also right to emphasise public transport’s environmental credentials.

While SCI predicts that rail is set to benefit from the EU’s Green Deal programme, the sector cannot take its green status for granted, particularly if ridership remains suppressed.

The road sector is making rapid progress with electric vehicles and has a real chance of ending rail’s hegemony over the argument within the next 10 years. In addition, while delivering truly automated road vehicles in congested cities is a monumental task, long distance ‘smart’ automated motorways are looking feasible a lot sooner. Offering the time to relax and work as you would on a train journey but within the sanctuary of an individual private vehicle is a real threat to long-distance rail.

For rail to maintain the upper hand, and to remain the sustainable mode of choice, the new normal must work for and not against public transport. To do that, people must be encouraged to travel by train.