As the latest wave of the coronavirus takes hold, Kevin Smith assesses the immediate challenges facing passenger and freight railways and argues that in the longer term, a fresh approach is required to attract new and lure old customers back. 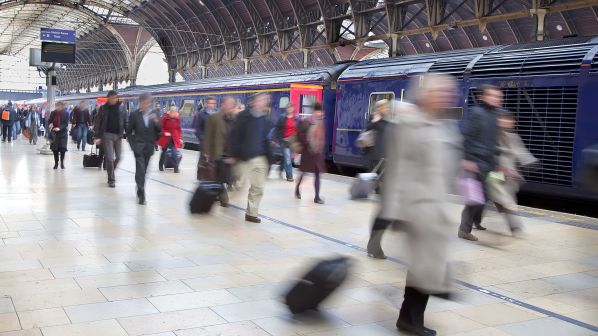 THE global railway industry enters 2022 facing another period of uncertainty. The rise of the Omicron coronavirus variant in December has prompted governments to reinstate restrictions on travel as they try to curb the spread.

The result for passenger operators, which were seeing a steady recovery of ridership, is for use to fall back again. Britain had reached 70% of its pre-pandemic passengers in early November but fell to 55% on December 9, comparable to what it had seen in July.

Thankfully the restrictions are expected to be short-term. As winter turns into spring, these numbers will begin to recover again. With vaccine rollouts continuing and boosters available in some countries, the worst days of the pandemic are hopefully behind us. However, it is arguable whether passenger railway usage patterns will ever be the same again.

As many of the reports in this issue show, operators from around the world believe that the time of ever-increasing numbers of peak time commuters packing onto trains and bolstering balance sheets are over. For Mr Andrew Haines, chief executive of Network Rail, this is not necessarily a bad thing.

Haines says peak demand drives peak costs. Instead, he favours spreading out use, and would like to see the high occupancy rates throughout the day on Japan’s Shinkansen trains replicated in Britain. Increased flexibility in working is now an opportunity to do this and spread the peak. The faster recovery of weekend and leisure travellers also hints at the potential to grow off-peak services.

If the days of treating commuters as “a cash cow” are indeed over, Haines is also right in saying that to convince a different type of customer to leave their car at home, the railway needs to rethink its approach to customer service. Maybe this will spell the end of the era of hard seats, limited legroom, dumbing down first class and poor catering? HS2 awarded its prized £2bn rolling stock contract to a consortium of Alstom and Hitachi last month. Perhaps this is the perfect opportunity to realise some of these changes in the onboard design and amenities on offer on these trains?

Like their European counterparts, Japanese railways are not immune from the effects of the pandemic - JR Central reported a Yen 1.021 trillion ($US 8.98bn) or 55.4% drop in revenue year-on-year in its fiscal 2021 results, with only a 14% improvement year-on-year in the second quarter of fiscal 2022 up to the end of September. However, NR and others are right to look here for inspiration.

The faster recovery of weekend and leisure travellers also hints at the potential to grow off-peak services.

As Shin Kaneko, president of JR Central, explains, the railway is experimenting with a variety of techniques to attract passengers to return. This includes packaging hotel stays with train journeys to meet demand for “worcation” trips. It is also adapting areas of Shinkansen trains and large stations to offer comfortable working spaces, tweaking the hot desking model that became popular pre-pandemic.

Inevitably the cost of the pandemic will continue to bite. JR Central is seeking to cut costs by 10% over the next 10-15 years to make up for the shortfall. Haines says that NR must become leaner and smarter if it is to stay relevant as it faces an annual deficit of £3.5-4bn compared with pre-pandemic. He urged suppliers with technical solutions that can help it to realise efficiencies to come forward.

In North America, many commuter operators have traditionally limited the majority of their operations to peak services. But this might now change. Ontario’s Metrolinx is one such operator that is shifting to an all-day service to capture more passengers not necessarily travelling to work.

This is likely to create greater conflict with freight trains and the owners of these networks, particularly in the United States as Amtrak, buoyed by unprecedented investment from federal government, proceeds with a vast expansion of service. An ongoing battle over reintroducing a passenger service along the Gulf coast could become the norm in the years ahead.

The freight railways themselves are also engaging in significant change. As energy production has switched to gas and efforts to decarbonise gather steam, these railways can no longer rely on coal as the mainstay of their operation, with intermodal set to fill the void. This brings new challenges, particularly in logistics, as emphasised in the recent supply chain crisis and congestion at ports.

It is also likely to result in a new type of freight railway. In Australia, while the government digs in over coal, the writing is on the wall, adding to the importance for the future of the country’s railways of completing the Inland Rail scheme to improve intermodal flows between Melbourne and Brisbane.

The merger of Canadian Pacific and Kansas City Southern into CPKC, which is expected to close by the end of the year, is testament to the shift. They say the first Canada-United States-Mexico railway, CPKC, will create the backbone for existing and new supply chain partners to convert lorry movements to rail and connect with new markets. Significant capital investment is foreseen to provide capacity for growth especially in Mexico where the port at Lázaro Cárdenas, which is connected to the CPKC network, is expected to compete with US west coast ports. As increasing US-China tension puts pressure on supply chains, the prospective growth of Mexican manufacturing to serve the USMCA market is another upcoming opportunity.

The presidents of the two railways, Mr Keith Creel and Mr Patrick Ottensmeyer, say they hope CPKC’s ability to take lorries off the road will help the environment. This remains rail’s calling card. It is encouraging to see post-pandemic economic stimulus in the US and Europe emphasising a building back greener agenda, including significant investments in rail, which leaves infrastructure developers optimistic. Along with attractiveness and reliability, combating the climate emergency must also be central to the argument to attract both freight shippers and post-pandemic passengers to use rail. Welcome to The Railway in 2022.