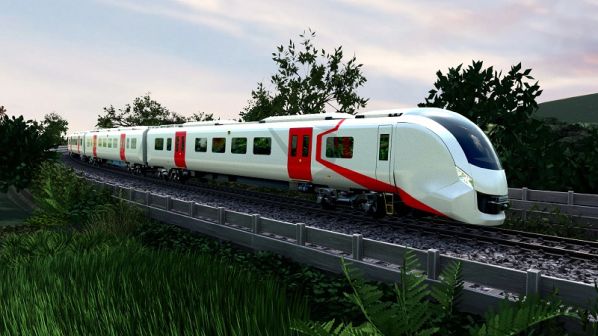 Hitachi is working with Hyperdrive to develop battery rolling stock.

I was pleased to see the announcement by the British government on July 14 to deliver a net-zero railway by 2050.  This is a bold ambition and one I hope that governments from the United States to Japan, from Italy to Sweden will consider adopting.

Achieving net zero is a global goal. That’s why our parent company, Hitachi Ltd, is also a Principle Partner at COP26 this November. This “Olympics of climate conferences” will be the largest ever event to take place in Scotland and is an important moment in time for the Hitachi Rail team as COP26 gives us the opportunity to articulate and accelerate our own decarbonisation commitments on the world stage.

Here are the three ways we are becoming a climate change innovator:

1. Drive modal shift in cities with Mobility as a Service

Rail emits five-10 times less CO₂ per passenger-km than a car and up 20-times less than planes. From a policy perspective, this is the low hanging fruit for net zero. But to drive modal shift away from planes and cars, we can’t just provide lower carbon forms of travel, we need to provide better forms of low-carbon travel.

That's where MaaS comes in. Consumers are increasingly stating a preference for greener, sustainable solutions. But being green isn't enough. Another key to unlocking modal shift is making every journey as smooth and easy as possible for passengers, and as cost effective as possible for operators. We are already pioneering digital systems that augment passenger flow applications, smart ticketing, security and predictive intelligent asset management systems to make this even more connected to the wider railway.

For example, we recently announced that we are piloting a new bus congestion/passenger flow monitoring system in the Italian city of Genoa with bus operator AMT.  It aims to give passengers information about most efficient mode of public transport, while allowing them to avoid buses that are crowded. This should make journeys shorter, as well as more comfortable, thereby encouraging people out of their cars on to more sustainable modes of transport.

To get to net zero on the railways, we have to deal with diesel. The first step is electrification - a process well underway, but far from complete. But with some electrification schemes either too expensive or too slow, new ways of powering trains are required. These can become enablers for future electrification by assisting with the generation of the business case.

Batteries and hydrogen can help close the gap.

While hydrogen will eventually have a role to play, we think battery technologies will have the most significant impact, by both being quicker to implement and at a lower cost.

With five years’ experience operating battery trains in Japan, to our British partnership with Hyperdrive and Eversholt, to our Florence battery trams and the introduction of new Blues tri-mode trains in Italy, we are pioneering in an area we believe will become more and more critical.

We’re taking this seriously. Earlier this year, the Hitachi Group announced that it is committed to achieving carbon neutrality at all its business sites by 2030 and an 80% reduction in CO₂ emissions across the company’s value chain by 2050. We’re also making progress at Hitachi Rail. I was pleased to report that we achieved just over 14% reduction in green house gas emissions per hour worked from factories (excluding Japan) in the period 2018 to 2020.

Becoming a climate change innovator isn't easy, but I’m proud of the progress our teams are making with our customers. We realise that we have a lot more to do on the road to net zero. But it’s the road we choose to take after that will matter most. I look forward to sharing that journey with you.