The United States might have just pipped China to first place in the Olympic medal table on the very last day of the Tokyo games, but on infrastructure investment, China remains way out in front. 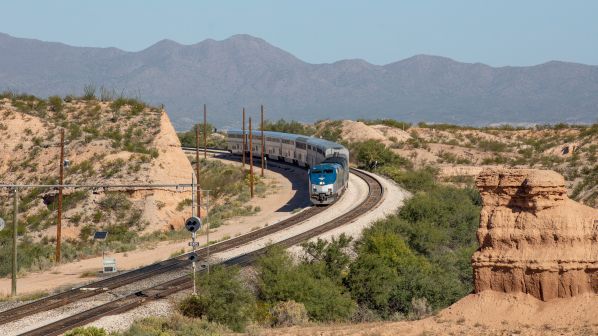 Amtrak's ambitions are modest, compromise should be possible.

AS we reported last month, China is aiming to nearly double its high-speed railway network by 2035 while plans are in place to build thousands of kilometres of metro and light rail lines in cities across the country.

The ambition in the US is more modest but no less urgent. Infrastructure spending is the talk of the town in Washington these days. President Joe Biden’s American Jobs Plan has metamorphosised into the Senate’s Infrastructure Bill, which was approved on August 10 when 19 Republican senators joined 50 Democrats in a rare display of bi-partisanship.

The $US 1 trillion package includes $US 550bn of new spending, everything from rolling out high-speed broadband, to replacing lead water pipes, and fixing crumbling roads. Passenger rail is another major beneficiary.

The plan earmarks $US 66bn for inter-city passenger rail while public transit will net $US 39.2bn. The $US 66bn sum includes $US 36bn for the Federal Railroad Administration (FRA), divided into $US 24bn for grants to support upgrades to the Washington, DC - New York - Boston North East Corridor (NEC) and $US 12bn for new and expanded inter-city rail, including high-speed, elsewhere in country. A further $US 8bn will support rail freight projects while Amtrak will receive $US 22bn. $US 6bn of this sum will support NEC improvements and $US 16bn will fund projects on its national network.

The legislation still has a little way to go to become law, and debates in the House this month will decide its fate. But with an apparent willingness on both sides of the aisle to get something done, there is optimism that Washington will deliver.

As Amtrak CEO William Flynn reveals, the state-owned passenger operator is excited about the transformative affect that this new spending will have. It hopes to deliver many of the projects identified in the Amtrak Connects US 15-year plan, which aims to connect 160 communities in 25 states by building new or improving existing rail corridors.

There are though two big challenges that Amtrak must overcome to deliver these targets: securing the track access it needs and receiving enough capital funding to deliver the necessary infrastructure improvements.

With an apparent willingness on both sides of the aisle to get something done, there is optimism that Washington will deliver.

Amtrak owns just 3% of the 34,400km of track used by its trains, mostly on the NEC where passenger trains have priority over freight and more than 70% of Acela trains run on time. On the national network where Amtrak uses host railways’ tracks, less than 60% of all long-distance trains run within 15 minutes of schedule and delays of many hours are common. This level of performance might be passable for a train used by tourists, but for others it is not acceptable and contributes to Amtrak’s poor public reputation.

While there is progress on some routes, notably in Virginia, Amtrak is currently struggling to reach a consensus with CSX and Norfolk Southern to introduce the Gulf Coast service between New Orleans and Mobile, Alabama. No passenger trains have run here since Hurricane Katrina caused widespread damage to tracks in 2005. The Surface Transportation Board (STB) has thrown out calls from the Class 1s to dismiss the case brought by Amtrak to introduce the train. And with President Biden’s executive order on competition in the US economy, which includes allowing open-access to rail infrastructure, upping the ante, the pressure is building. Indeed, Flynn says that with Amtrak simply requesting enforcement of the law granting it priority on host railways, this STB case is unlikely to be the last.

Compromise should be possible. Amtrak’s ambitions are after all modest: most Connect US corridor plans envisage just three or four trains per day. This is not Europe where trains run at 20-minute intervals on some key long-distance routes, side-lining freight. With modern operations management technologies, pathing these should be straightforward. Where there is a will there is most definitely a way.

The one line where European frequencies could be possible is the NEC. But it is held back by severe bottlenecks, which constrain capacity to just an hourly Acela service. Yet the cost of new tunnel and bridge projects is vast. The Gateway Program to build a new tunnel and repair the North River Tunnel, is estimated to cost $US 30bn alone, all but wiping out the FRA’s Infrastructure Bill allocation.

The Transit Costs Project at New York University attempts to find out why transit projects in New York cost more than 20-times more per kilometre than in Seoul. It found that the US lags behind peers in France and Japan and now China in the experience of delivering rail infrastructure projects, pushing up the cost. With no equivalent investment over the three or four decades, they argue that only a steady flow of projects will help American engineers to embrace international best practice and bring costs down. Of course, this is not an impossibility, the experience and know-how is out there. But a coherent long-term plan of continuous investment is needed to realise the ambitions.

President Dwight Eisenhower’s Interstate highway system is regarded as a shining example of American progress in the 20th century. Unfortunately, nothing to match this vast infrastructure programme has happened in the 60 years since.

The Biden administration hopes to be a leader on climate change which, following more record-breaking heat waves this summer, is very much a current phenomenon. Getting more people out of cars and onto passenger trains is a small but symbolic way of contributing. It is also a means for keeping up with China. Hopefully that is enough of a spur for Congress to deliver.