Mainline ATO a huge opportunity if railways can get it right

In summer 2022 Jon Worth put international rail travel in the European Union to the test. From Haparanda in the north to Lisbon in the west and Athens in the east, he went everywhere the railway would take him. Here he explains to IRJ the conclusions of his research. 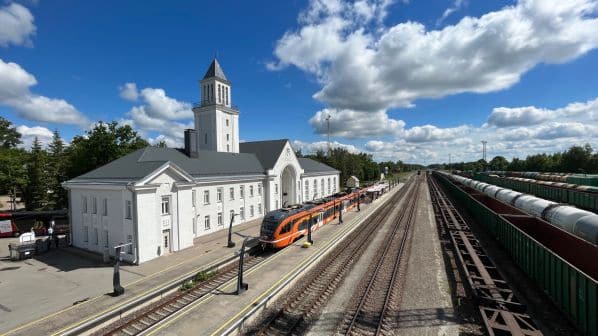 Valga, Estonia, on the border with Latvia. Photo: Jon Worth

WHEN you cross an international border as a rail passenger in Europe everything gets harder. International trains operate less frequently than national services, obtaining timetable information and tickets for cross-border services can be complicated, and in some places rail connections are absent altogether and you have to resort to other modes to continue your journey.

These are the problems I encountered over and over again as a Berlin-based consultant who needed to travel to client meetings all over Europe while seeking to avoid air travel.

But when stuck for the umpteenth time at Düren or Padborg or Mannheim I started to ask why international rail travel in Europe so often falls short and why the European Union (EU) has been unable to solve the issues I was encountering. I must stress that I have never worked for a railway company but have come to this out of my need to be able to travel for work in a green and convenient way.

The EU has of course tried to fix many of the problems facing Europe’s railways. The four Railway Packages were supposed to create opportunities to improve international passenger services. Investment in improved infrastructure, such as through the Trans-European Transport Network (TEN-T) programme, is supposed to increase speed and capacity.

But from a passenger perspective the real problems on the ground have persisted. The principal long-distance passenger operators are still the state-owned incumbents and all of them focus heavily on their national markets rather than seeing opportunities to expand cross-border. If all the headaches I have been encountering for years are to be solved, then politicians need to find solutions, rather than only relying on railways to act. As these problems are cross-border, the EU has to be the relevant political arena.

Mr Michael Cramer, a former member of the European Parliament, understood some of the problems, detailing them in his 2015 report “Missing Links,” which looked at 15 cross-border lines that had fallen into disrepair and could be reactivated. Cramer argued that action in each of these cases would provide a material benefit for international rail.

When I re-read Cramer’s report in 2021, I was disappointed to discover that in six years only one project had materialised: to reopen the line between Selb-Plößberg in Germany and Aš in the Czech Republic. Why was progress so meagre? And what could I possibly do to help? Or were there other even easier problems to solve than reopening lines?

This is how the #CrossBorderRail project was born: to cross all the internal borders of the EU where this is possible by rail and assess what does and does not work. As well as the missing links Cramer had discovered, other problems would also be examined - places where a line exists but no passenger services are provided, places where trains do run but timetables do not meet passengers’ needs, and places with timetabling or data problems.

An extraordinary online community composed of railway employees, civil servants, historians and rail enthusiasts helped me work out where to go, and what to assess. I took a folding bicycle with me so I could reach places without a train service, with the project crowd-funded by readers of my blog. In the end the journey involved taking 186 trains, visiting 95 border crossings, and travelling over 30,000km by rail, 900km by bicycle and 1500km by bus, taxi and ferry.

I found that reopening closed lines presents a whole slew of problems. At Groesbeek between Nijmegen, Netherlands and Kleve, Germany, the old line bisects the town square, and residents would understandably have issues with it reopening. At Breisach between Freiburg in Germany and Colmar in France, a road bridge was built on the old foundations of the rail bridge blown up at the end of World War II. A new bridge over the Rhine is neither simple nor cheap. At Bad Radkersburg, Austria, a school has been built on the former railway to Gorna Radgona in Slovenia. Of the border crossings I visited, only Quiévrain between Valenciennes in France and Mons in Belgium has the potential for reopening in the short term, as only 2km of track would need to be reactivated and it would finally give the Valenciennes-based EU Agency for Railways (ERA) a connection to Brussels.

Much easier to solve are the cases where the railway is still operational but no through passenger services run. The most absurd case was in Lithuania, where the Vilnius - Turmantas (population: 286) service could easily be extended across the border by 25km to Latvia’s second city, Daugavpils (population: 80,000). The necessary rolling stock and personnel already exist, but a dispute over the minimal cost of a few litres of diesel means Daugavpils is not connected.

“Until it is as simple, convenient and reliable to take a train across a border in Europe as it is to take a train within one country, then the EU still has work to do.”

In other places, regional trains terminate at the last station before the border, rather than at the first station on the other side. There are no regional trains between Modane in France and Bardonecchia in Italy, or between Hendaye in France and Irun in Spain, for example. Elsewhere, minimal changes to the infrastructure could lead to solid improvements. Electrifying the 10km from Hamont in Belgium and building a new platform at Weert in the Netherlands would provide better connections between Antwerp and Eindhoven.

Poor timetable planning by national operators limits rail’s potential at other borders. Passengers attempting to take the train from Tallinn in Estonia to Riga in Latvia are left stranded at the border station of Valga for three hours because the timetables are not coordinated. A journey from Marseille to Genoa takes two hours longer than necessary due to uncoordinated timetables.

Trains run just twice a day between Mons in Belgium and Aulnoye in France, and this connection will close in December, with low passenger numbers cited as the reason. But if you provide a timetable that poor, it is no surprise that passengers do not use the train. There are just two trains a week between Kaunas in Lithuania and Białystok in Poland via Suwałki. As this is along the route of a new line to be built under the Rail Baltica project, a daily service is the minimum that could be expected here.

A poor approach to sharing timetable data afflicts three of the five rail connections across the border between France and Spain. Countries such as Estonia and Croatia do not upload all their data to UIC Merits, the timetable system on which the German Rail (DB) and Austrian Federal Railways (ÖBB) journey-planning websites are based.

Other situations are simply ridiculous, such as the catenary masts that end right in the middle of the bridge over the Neiße river between Zgorzelec in Poland and Görlitz in Germany, as the route is electrified only on Polish territory. And then there is the absurd jump in ticket prices if you book from Germany to Strasbourg in France rather than just to Kehl, only 9km away but on the German side of the border.

Details of how to fix these problems are summarised in the top 20 conclusions of my project, but all of these issues remain unsolved to date because of what Mr Josef Doppelbauer, executive director of ERA) calls “collective irresponsibility.” Each country or operator sees these issues as something for the people on the other side of the border to fix.

This is where the European Commission (EC) needs to act by focussing on the details. Why are there no trains between Turmantas and Daugavpils, and what could the EU do to solve the problem? Would simply getting policymakers from both countries to sit down together be enough to solve the problems, or is there some financial and technical issue standing in the way? A yearly cross-border rail index would be a useful tool for the EU to provide a rolling assessment of where international passenger services are getting better or worse, and where concrete action is needed.

In many discussions with political decision-makers it is clear that there is good will towards rail, and a fundamental understanding that if mobility is to be preserved or even enhanced in Europe, rail’s modal share - including international passenger traffic - needs to improve. But what is missing is practical understanding of how to make the changes.

The problems I unearthed throughout the #CrossBorderRail project might not be the central issues to be addressed to improve international rail travel, but they are all comparatively simple, quick and cheap to solve, and would bring real benefits to people in each of the regions concerned.

Until it is as simple, convenient and reliable to take a train across a border in Europe as it is to take a train within one country, then the EU still has work to do. At least now some of the most glaring absurdities and omissions should be clear for all to see and give the EC a clear idea of where to start to make improvements.