THE first passenger train to serve the new Berlin Brandenburg International Airport arrived at 05.37 on October 26. 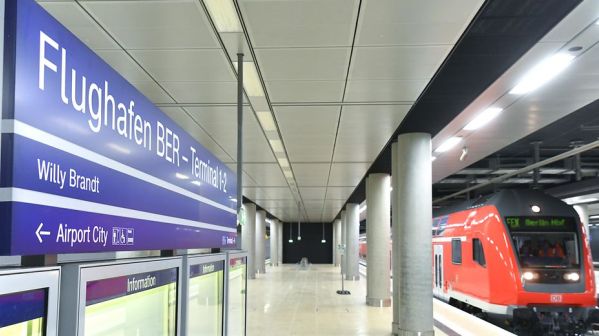 S-Bahn services to and from Berlin have been extended to the new airport from Berlin Schönefeld station via a new 7.7km branch with one new intermediate station at Waßmannsdorf. Services have begun five days before the airport officially opens on October 31 following a delay of nine years due to construction and safety system approval problems.

Berlin Brandenburg International Airport (BER) has been built partly on the site of Berlin Schönefeld as part of a plan to close both of Berlin’s other airports; the inner-city Tempelhof airport built in the mid-1930s, which closed in 2008, and Berlin Tegel, which will close in early November.

From October 31, all regional and long-distance rail services serving Berlin Schönefeld station will be re-routed via new infrastructure to the new Flughafen BER - Terminal 1-2 station located beneath the new terminal building. All flights will serve Terminal 1 with Terminal 2 not opening until 2021 at the earliest due to the Covid-19 pandemic.

The tunnel beneath the airport building and parts of the airfield was built by the airport development company from April 2008 onwards. It was handed over to German Rail (DB) subsidiary DB Project Bau to be equipped with railway infrastructure by a variety of contractors under a fixed €285m contract.

The 15 route-km of new 15kV ac electrified main line tracks forms a loop via the airport south of the existing Berlin Outer Ring line with connections at the eastern end towards Berlin and Cottbus, and at the western end to the Outer Ring from where trains can continue to Leipzig, Dresden and Potsdam. This line plus the 7.7km extension were all built and opened for rail traffic on October 30 2011. In total around 35.5km of new 120km/h mainline track, and 15.5km of 100km/h S-Bahn track has been built. DB says the total investment on the new route and stations is €675m.

The railway infrastructure was in place and the underground station largely fitted out in time for the original opening date. Trains were operated through the tunnels daily from October 2011 in order to prevent moisture build up. The empty trains also helped to prevent theft of the overhead power supply wires. The airport company funded these trains following a dispute with DB over the costs.

In addition to six S-Bahn services per hour to/from Spandau and central Berlin, the new airport will be served by four regional routes: