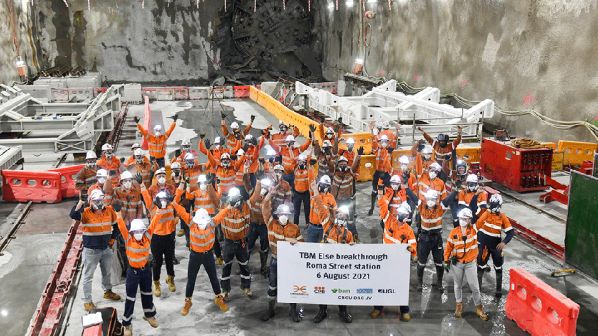 IN a major milestone for Brisbane’s Cross River Rail commuter project, the first of two tunnels beneath the Brisbane River and the city’s central business district has been completed, with tunnel boring machine (TBM) Else breaking through to the underground box at Roma Street.

“The fact that a proposed indoor arena at Roma Street would likely join The Gabba [cricket ground] as a key venue for the 2032 Olympic and Paralympic Games makes the milestone even more special,” says Queensland state transport and main roads minister, Mr Mark Bailey.

“The very same section of tunnel that this 1350-tonne mega machine has just finished excavating will be used to take sports fans between athletics and swimming events during the Games. With 14 active worksites already under way, Cross River Rail is a perfect example of how we’re getting Olympics ready.”

The Unity consortium of CPB Contractors, UGL, Aecom and Jacobs, together with partners Hassel, RCS Australia, Acmena, Martinus Rail and Wired Overhead Solutions signed an alliance agreement with the Cross River Rail Delivery Authority, Queensland Rail for the rail integration and systems package in August 2019, which includes fitting out the tunnels.

The other TBM, Merle, is also expected to breakthrough at Roma Street in the coming weeks, with both continuing through to the project’s northern portal at Normanby and emerging by the end of the year

TBM Else started work from Woolloongabba earlier this year. Trains are scheduled to run through the tunnels in 2025.