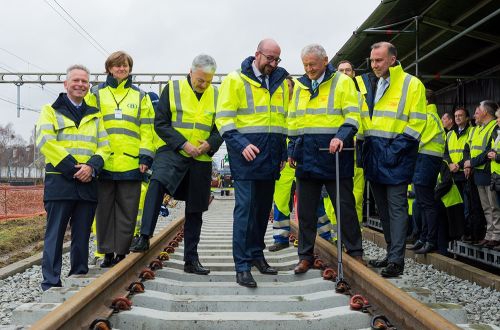 In March 2017 the federal government decided to allocate an additional €1bn in state funding to a group of strategically-important rail projects. Combined with the remaining balance of the RER Fund and regional financing, this has enabled work to resume on the RER project.

Prior to resuming construction, Infrabel and Belgian National Railways (SNCB) agreed to proceed with the project on a section-by-section basis.

On the Brussels - Ottignies line, the initial focus is the construction of two additional tracks between Watermael and La Hulpe, which is due to be completed by 2025.

SNCB says work will begin soon on the 2km Ottignies - Louvain-la-Neuve section, and this will be completed by December 2023. Construction will resume on the quadrupling of the La Hulpe - Ottignies section within two years and is due to be completed by the end of 2026.

On the Brussels - Nivelles line, construction will restart in the second half of this year on two additional tracks on the 6km section between Waterloo and Braine-‘Alleud. Works will be completed in 2025.

In total, around 100km of additional track will be laid on these two lines.

The RER project involves expanding five key lines to four tracks to provide towns within a 30km radius of Brussels with a train every 15 minutes. Stations will be modernised with improved accessibility and increased parking for both cars and bicycles.